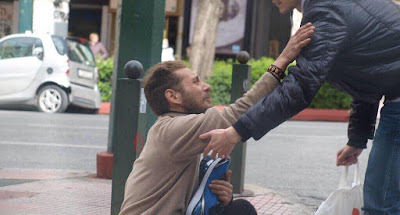 Matthew 3:13-17       Jesus came from Galilee to John at the Jordan, to be baptized by him. John would have prevented him, saying, “I need to be baptized by you, and do you come to me?” But Jesus answered him, “Let it be so now; for it is proper for us in this way to fulfill all righteousness.” Then he consented. And when Jesus had been baptized, just as he came up from the water, suddenly the heavens were opened to him and he saw the Spirit of God descending like a dove and alighting on him. And a voice from heaven said, “This is my Son, the Beloved, with whom I am well pleased.”

Reflection      The question humanity is faced with is not, “What do you believe?” It is, “How are you living?”The clue to answering this question is hidden in plain hearing, in Jesus’ response to John’s hesitation to baptize him. And Jesus said, “Let it be so now; for it is proper for us in this way to fulfill all righteousness.” We are meant to live in fulfillment of all righteousness.

Which brings us to Jesus’ other weighty word,  ‘fulfillment.’ To fulfill is to make real and carry out. It  presumes there has been an order or instruction that is to be performed and perfected. When Jesus says, “for it is proper for us in this way to fulfill all righteousness,” we understand the order or instruction to be performed and perfected is righteousness, living in right relationship with God and with all people.

We are not intended to fill our lives with empty rituals (as a friend recently noted, champagne, sparklers, exotic vacations and flaming deserts are titillating but they have no lasting value). We are meant to use our lives to embody and express God’s promise of dignity and love for all people.

Last week I challenged parishioners to go out of their way to extend God’s love to a homeless person. Here is Dave Arneson’s description of how he and his wife Shelly were transformed by doing just that.

“Tuesday is date day for Shelly and me.  I asked her what she wanted to do and her reply was “I want to go and take care packages to the homeless.”  After Sundays For God’s Sake Listen, we both had a better appreciation for what homeless meant to others, and allowed us to start thinking a little differently.
So we put together some sacks with water, a granola bar, and some fruit and headed downtown to find some individuals to share them with.  As we got closer to the area, my impression was that we were going to just hand them out through the car window as we came upon those that looked like they could use them.  Well, Shelly had a different idea.  She wanted to go greet them and spend some time talking with them.  My insides started churning as this was not what I had envisioned.
As we neared the park near Speedway and Stone, there were several small groups of folks that appeared to be homeless.  We saw one man by himself on the far side of the park, and Shelly said let’s start with him.  I immediately said, “are you sure.  I don’t think he looks well and might possibly be talking to someone even though he was there by himself.”  I wanted to just go find someone else who might be a little safer.  Shelly said, “you can stay here – I’ll just take this over and you can watch from the car”.  Well, I wasn’t going to let her go alone, and I know after 27 years of marriage that she was going to do it anyway.  I told her to wait while I locked my wallet in the car and we could go together, that I would be right behind her, literally right behind her!
As we approached, the gentleman he was busy sorting through his array of what can only be described as garbage in a heap around him.  There was some sort of blanket, maybe a tarp, several cardboard flat boxes, papers, etc.  I thought how can anyone live like this.  Shelly approached him and began a conversation.  He was wearing pajama bottoms, a tattered sweatshirt, a flip-flop on one foot and a sock on the other.  He looked as if he had not seen a shower in a very long time.  He had been talking to either himself, or to someone or something around him.  We assumed he was suffering from some type of mental illness.
We learned that his name was Bernard as Shelly offered him one of the care packages that we had brought.  He took the package, then held up one finger while he searched his area.  After a minute or so, he came back with an orange that he had in his “home” and gave it to me.  Apparently he felt the need to give us something in return.  We talked with him for 10 or 15 minutes trying to find out if he was OK, and what could we bring him.  He said he could use some beef jerky – food and protein that would not go bad so quickly.  Shelly asked how he was going to eat and he said “God will provide”.  We said how do you know He will…..and he said “Well, he sent you”.  We looked at each other and both thought the same thing that his faith was what was keeping him going.  He had not only one bible in his goods, but two!  We thanked him for his time and said we would be praying for him.
As we drove home, we talked about meeting him and his situation.  That’s when it occurred to me that I don’t think God sent us for Bernard, but he sent Bernard for us.
Many of our assumptions about the homeless were just that – assumptions.  Until we took the chance to spend time with them, to listen for God’s sake, did we truly see His presence.”
If you found this post to be meaningful please share by clicking on icons below. Thank you!