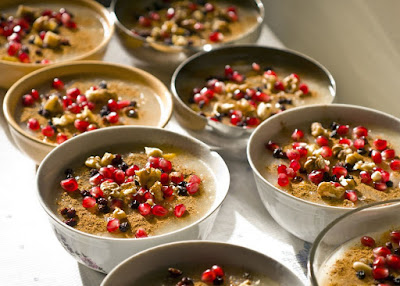 Mark 9:38-50        John said to Jesus, “Teacher, we saw someone casting out demons in your name, and we tried to stop him, because he was not following us.” But Jesus said, “Do not stop him; for no one who does a deed of power in my name will be able soon afterward to speak evil of me. Whoever is not against us is for us. For truly I tell you, whoever gives you a cup of water to drink because you bear the name of Christ will by no means lose the reward.

“For everyone will be salted with fire. Salt is good; but if salt has lost its saltiness, how can you season it? Have salt in yourselves, and be at peace with one another.”

Reflection  Recently a group of parishioners joined me to Pray for Peace with a diverse group of folks at the Muslim Community Center. Following the evening call to prayer we were served tea and Noah’s pudding. This simple act of hospitality is as much a revelation of God’s presence and action on earth as any Christian teaching, preaching or healing. In fact I would argue that the sweet and savory flavors of Noah’s pudding articulate an unsurpassed theology of union without uniformity, communion without conformity. Affixed to the cover of each container of Noah’s pudding was this message.

“When Noah’s ark came to rest on Mt Ararat, Noah’s family celebrated with a special dish. SInce their supplies were nearly exhausted, what was left was cooked together to form a pudding, what is now called ashure. Ashure is a holiday celebrated annually in Turkey. It signifies many events for Muslims, among the most significant being Noah’s ark set on dry land. The month long festivities center on promoting friendhship, good relations between neighbors and universal peace and understanding.” In other words, Noah’s pudding is made of left overs, things that folks usually do not put together, just like the Presbyterian, Lutheran, Sikh, Roman Catholic, LDS, Muslim and Episcopalian folks, all mixed together in prayer for the sweet hope of peace.

Though we may not describe a cup of water or Noah’s pudding as acts of great power, we certainly see them as acts of love. And frankly, if our eyes are dim and our hearts hardened such that we fail to apprehend these gestures of hospitality as a revelation of God’s love then we may as well tie an enormous weight around our necks and be thrown into the sea.

What is the point of proclaiming the Kingdom of God for all people if we step on or over one another? Better we should cut off our feet. What is the point of proclaiming God’s presence and action on earth is we fail to see simple acts of generosity as revelations of God’s presence and action among us? Better we should tear out our eyes.

Jesus extends the endowment of his love to transform the lives of ordinary people, one person at a time. He welcomes a shunned man disfigured with leprosy (Mark 1:40–45), he forgives a man who is paralyzed by sin (Mark 2:1–12), he breaks Sabbath law to heal a man with a withered hand (Mark 3:1–6), he violates just about every religious custom by healing a hemorrhaging woman (Mark 5:25–34), he raises a religious official’s daughter from the dead, (Mark 5:21–42)  heals a deaf mute (Mark 7:31–37) and restores sight to a blind man at Bethsaida (Mark 8:22–25).

Jesus is also the consummate host, multiplying loaves and fish to feed crowds of four and five thousand people (Mark 8.1-10, Mark 6.30-44). Who knows why this crowd feeding story is told twice in Mark’s gospel? It may have been rerun to make the point to people who would hear, not read, the gospel. Even the least bit of hospitality, a few loaves of bread and a couple of fish, is sufficient to feed and transform the hearts and the minds of the masses. In the Episcopal Church we embody this wisdom every Sunday in our Eucharist.

A tiny bit of bread, the smallest gluten free wafers known to humankind, yet this simple act of hospitality offered to anyone who extends their hands in humble supplication has the power to transform lives. And the same is so for the mere sip of wine. From the first time I served as a lay eucharistic minister offering the chalice to the people, I witnessed the depth and breadth of humanity in the eyes of the people. Brimming with tears of joy, loss and fear, squeezed shut in deep concentration, wide in wonder, drawn in consternation, staring far away. Then the singular word of assent, sometimes barely audible, others with a nod, or like one person whom I will always hear, two distinct syllables, said with the full force of her being. Ah - men. Derived from the Hebrew āmēn, which means certainty, truly, it is so.

One at a time we receive the body and blood of Christ, we accept the presence of God into whatever state we bring to the table; blind, mute, deaf, hard of heart, paralyzed by illness, possessed by demons, obcessed with addictions, drenched in fear or full of joy and gratitude. God meets us one on one, exactly as we are, offering the simplest gesture of hospitality, a bit of bread, a sip of wine.  All that is left for us to do is avow its veracity saying, “Amen, it is so.”

If you found this post meaningful please share by clicking on icons below. Thank you.
Posted by Debra Asis at 11:38 AM No comments: