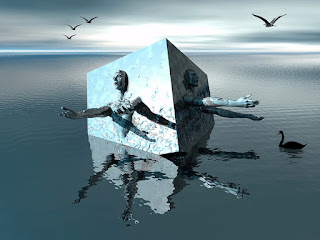 Luke 8:26-39     Jesus and his disciples arrived at the country of the Gerasenes, which is opposite Galilee. As he stepped out on land, a man of the city who had demons met him. For a long time he had worn no clothes, and he did not live in a house but in the tombs. When he saw Jesus, he fell down before him and shouted at the top of his voice, "What have you to do with me, Jesus, Son of the Most High God? I beg you, do not torment me" -- for Jesus had commanded the unclean spirit to come out of the man. (For many times it had seized him; he was kept under guard and bound with chains and shackles, but he would break the bonds and be driven by the demon into the wilds.) Jesus then asked him, "What is your name?" He said, "Legion"; for many demons had entered him. They begged him not to order them to go back into the abyss.
Now there on the hillside a large herd of swine was feeding; and the demons begged Jesus to let them enter these. So he gave them permission. Then the demons came out of the man and entered the swine, and the herd rushed down the steep bank into the lake and was drowned.
When the swineherds saw what had happened, they ran off and told it in the city and in the country. Then people came out to see what had happened, and when they came to Jesus, they found the man from whom the demons had gone sitting at the feet of Jesus, clothed and in his right mind. And they were afraid. Those who had seen it told them how the one who had been possessed by demons had been healed. Then all the people of the surrounding country of the Gerasenes asked Jesus to leave them; for they were seized with great fear. So he got into the boat and returned. The man from whom the demons had gone begged that he might be with him; but Jesus sent him away, saying, "Return to your home, and declare how much God has done for you." So he went away, proclaiming throughout the city how much Jesus had done for him.
Reflection    Inside my generally poised and quiet exterior I’ve borne a few storms along the way; whirlwinds of uninvited thoughts and indubitable tornadoes of emotion. Inside it felt no less perilous than the raging wind and waves that provoked Jesus’ disciples to shout, “Master we are perishing.” (Luke 8. 24) And although I have never been physically bound “with chains and shackles” I do recall feeling the weight of the world hammering my chest while wirey fingers cuffed my throat. Fear - this will never end. Fear - this will end. I suspect most people have had a taste or two of such extremis, where circumstances (inside or out) seem so grave, so isolating, so out of control, that there is nothing to do except fall down on our face before Holy God and surrender. And then...
We know the story. Something unexpected happens. Jesus calmed the storm his disciples believed would kill them, and then they were “afraid and amazed...(and asked) who is this who commands even the winds and the water...?” (Luke 8.25) Jesus moved on to approach the tormented man of Gersasene, and instead of turning away disgusted by his vulgar behavior, Jesus asked the deranged man whose “chains and shackles” were insufficient to contain the powerhouse of his emotions, Jesus asked, “What is your name?” In other words, Jesus ‘saw’ beyond the circumstance. Jesus ‘saw’ the real man. By asking the man his name Jesus affirmed his very essence. And the tormented man was restored to his right mind. The people who had persecuted him were “seized with fear.” But not the tortured man. His heart was filled with desire. He begged to stay with Jesus, the one by whom he felt seen and loved.
Exposed and naked the tormented man fell down before Jesus. In an act of utter surrender he prostrated himself before the “Son of the Most High God.” And he was transformed.  In his Letters to a Young Poet Rainer Marie Rilke wrote, “Perhaps all the dragons in our lives are really princesses who are waiting to see us act, just once, with beauty and courage. Perhaps everything that frightens us is, in its deepest essence, something helpless that wants our love.”

Posted by Debra Asis at 8:51 AM No comments: