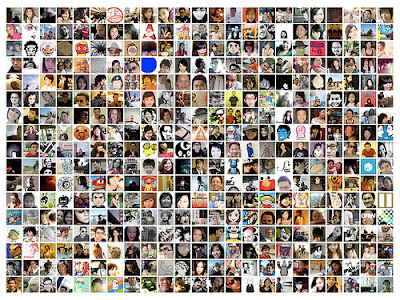 Acts 4:32-35        Now the whole group of those who believed were of one heart and  soul, and no one claimed private ownership of any possessions, but everything they owned was held in common. With great power the apostles gave their testimony to the resurrection of the Lord Jesus, and great grace was upon them all. There was not a needy person among them, for as many as owned lands or houses sold them and brought the proceeds of what was sold. They laid it at the apostles' feet, and it was distributed to each as any had need.

Reflection       “Held in common.” What does it mean to be held in common? Perhaps it means to belong equally to someone or something, a community, a history, a way of being, much like the “common” land at the center of New England towns that ‘belonged’ to everyone in the community. But the image that captures the notion of being “held in common” for me is a massive artwork in the baggage claim area of the Oakland, CA airport.

The first time I descended the escalator into the swarming throngs of travelers waiting for their luggage I could not “read” the 10’ x 20’ piece of public art mounted across the luggage carousels from me. Vibrant colors seemed to be moving, or maybe not. Could it be my eyes? So I wound my way through the crowds to get a closer look.

Gradually a matrix of images came into focus. Though I did not count and could not measure there looked to be about five rows of forty 8”x10” rectangular, slowly changing images of people. A portrait of a Haitian woman might become a strapping athlete, close up of an infant’s face, then heavy weight wrestler, ballerina, elder in a wheelchair… such that altogether the constantly emerging face of humanity shifted culture, color and form. The further away from the artwork one stood, the more the the images were “held in common.” The closer in one stood, the subjects became the particular foreground.