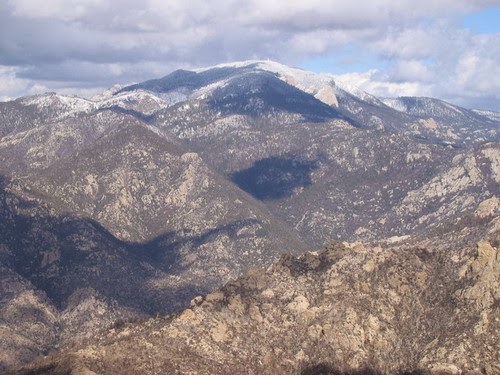 Matthew 17:1-9        Six days after Peter had acknowledged Jesus as the Christ, the Son of the Living God, Jesus took with him Peter and James and his brother John and led them up a high mountain, by themselves. And he was transfigured before them, and his face shone like the sun, and his clothes became dazzling white. Suddenly there appeared to them Moses and Elijah, talking with him. Then Peter said to Jesus, "Lord, it is good for us to be here; if you wish, I will make three dwellings here, one for you, one for Moses, and one for Elijah." While he was still speaking, suddenly a bright cloud overshadowed them, and from the cloud a voice said, "This is my Son, the Beloved; with him I am well pleased; listen to him!" When the disciples heard this, they fell to the ground and were overcome by fear. But Jesus came and touched them, saying, "Get up and do not be afraid." And when they looked up, they saw no one except Jesus himself alone.
As they were coming down the mountain, Jesus ordered them, "Tell no one about the vision until after the Son of Man has been raised from the dead.”
Reflection        There is something about mountains. They have an uncanny allure. Throughout history humans have been drawn to mountains seeking wisdom and inspiration, hoping against hope to draw closer to God. That was the case for Moses and Elijah, both mountain men of the first order.
Moses climbed Mount Sinai hoping to defend the people of Israel who had sinned against God by making a golden calf while waiting for the forty days that Moses was on top of the mountain receiving God’s commandments to govern the life of the Israelites whom he led out of slavery from Egypt. Unlike Moses,  after forty days of traveling through the wilderness, when he finally ascended Mount Horeb the prophet Elijah complained bitterly to God about the unfaithfulness of God’s people. At the top of the mountain both Moses and Elijah experienced the presence of God with them and were sent to continue God’s work in the world.
Centuries later Jesus takes his three closest friends to have their mountaintop experience of God present with them. On the mountain they have the insight that humanity and divinity are revealed in the person of Jesus. Although it appears that Jesus is transfigured, it is the vision and the understanding of Peter, James and John that is illuminated and transformed. They “see” the unity of humanity and divinity in Jesus. They “hear” the transcendent voice of God instructing them "listen to" (and presumably be guided by) Jesus. I believe this is the key to understanding this enigmatic text. Listen to Jesus, the one who instructs his friends and us in incomprehensible ways; the one who told his friends he must suffer, die and be resurrected in Jerusalem.
Like Peter,  when we have our mountaintop experiences we want to “build tents,” we want to cling to them or go back to them. But Jesus leads us down the mountain and heads straight for Jerusalem. If we listen to Jesus we take our experience of God with us into our world which is full of suffering and death. If we listen and follow Jesus, we touch the people who are afraid and suffering and say, “Get up. Do not be afraid.” Life does not end with death. God is with us, always.


If you found this post meaningful, please share it with your friends by clicking not he icons below.      Thank you.
** image is Mt. Lemmon, Arizona
Posted by Debra Asis at 8:25 AM No comments: