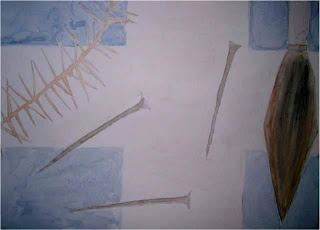 Almost everyone was accusing Jesus of things he didn’t do and things he didn’t say. The Roman soldiers, the Jewish officials, the chief priests and scribes, even the people who only days before gathered to hear him teach and to be healed – they were all in a frenzy accusing Jesus. Only Pilate and King Herod did not accuse him. They found Jesus innocent, actually three times. But in the end they too were implicated in the wrongful death of an innocent man because both Herod and Pilate failed to use their authority to oppose the crowds that were swept away in an emotional fervor. The two men in authority failed to execute truth and justice. An innocent man was crucified and died.

Still, that is not cause to despair. Then Jesus said, “”Father, forgive them; for they do not know what they are doing.” In some bibles this verse appears in brackets because scholars cannot agree if it was in the original text and at some point was cut out, or if it was a later addition to the text. What matters to me is that it is there now, and I am grateful. Jesus’ words are an incredible affirmation of our human condition, “…they do not know what they are doing.” Isn’t that the truth! I cannot for a minute believe that the entire assembly of Roman soldiers, Jewish officials, chief priests, scribes and ordinary people were ill willed or evil. Nor can I believe that Herod and Pilate were inherently bad. I cannot believe that any more than I can believe I am ill willed or evil when I fail to seek and serve and save the suffering people in my world.

Who among us is innocent? Blameless? Pure and free of wrongdoing? Let me suggest that the answer is – not one of us is innocent. And the good news is we are forgiven because we are the beloveds of God, just the way we are. Does that mean we have license to be corrupt, self-serving or live without regard for the consequences of our behavior? Absolutely not. What it means is when we inevitably act and reveal that we “know not what we are doing,” we are already forgiven. Thanks be to God.
Posted by Debra Asis at 7:51 PM 2 comments:

Most people today believe in God or in some mystery greater than them selves. More and more of these believers are deciding not to be identified with a religion. Even though the U.S. population continues to become less “religious,” 70% of North Americans report they believe in a personal God and another 12% believe in a higher power but not a personal God. (American Religious Identification Survey – http://www.americanreligionsurvey-aris.org/)
Today there are about 3.6 million non-affiliated believers. Many of these people call themselves “spiritual but not religious seekers.”
I wondered:
What would happen if we offered a safe place for seekers and believers to connect?
What would happen if we gave everyone the same meaningful and time-tested text to engage?
What would happen if we paid serious attention to how the text applied to the real lives of the seekers and believers?
What would happen if a community of believers and seekers discovered the Holy in their lives together? (Learning together http://en.wikipedia.org/wiki/Collaborative_learning)
And so hOlybytes was born.
hOlybytes is a place to hear and to tell the good news that the Holy is present and active in all of our lives.
Posted by Debra Asis at 9:38 PM 1 comment:

Email ThisBlogThis!Share to TwitterShare to FacebookShare to Pinterest
Dear friends,

I used to have a hard time reading the Bible. I would get all tangled up in questions. Is this true? Did this really happen? How can anything so old and so strange have anything to do with me? Still, I was intrigued. The Bible has been around for a very long time. People love it. People hate it. Either way, they just keep reading it. It is the most widely printed book in the world, published in thousands of languages and versions. WHY?

Ten years ago an Episcopal priest caught my imagination when he pointed out that I could read the Bible for information (trying to discover historical facts) or I could read the Bible for formation (trying to discover what the Bible has to say to me today). He introduced me to a method he calls The Art of Engaging Holy Scripture,based on an practice of reading the Bible that has been around since the 6th century known as lectio divina. (http://www.saintbarnabas.org/images/sitecontent/pdf/taehs%20information%20nov09.pdf)

Being in conversation with God through the Bible this way has changed how I see the Bible and it has really changed my life. The ancient text is alive for me. I find my self and my situations in the stories. But more than that, I find hope and experience joy and enthusiasm in my life. I feel more and more connected to people – people long ago and people today. And the sense of meaning and value in my life keeps growing.

I want to share this with you in a way that feels safe and invites you to participate as much or as little as is comfortable to you. We are all joined in the interconnected web of creation. We all have stories to share. I hope you enjoy the stories you read here and when it feels right, maybe you will want to share yours too. Come and see. Read other people’s stories. See how they are finding meaning and value for their lives in the words of the Bible.

Thank you for visiting hOlybytes.