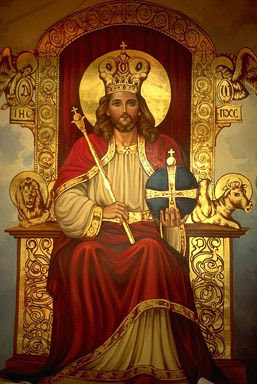 John 18:33-37        Pilate entered the headquarters again, summoned Jesus, and asked him, “Are you the King of the Jews?” Jesus answered, “Do you ask this on your own, or did others tell you about me?” Pilate replied, “I am not a Jew, am I? Your own nation and the chief priests have handed you over to me. What have you done?” Jesus answered, “My kingdom is not from this world. If my kingdom were from this world, my followers would be fighting to keep me from being handed over to the Jews. But as it is, my kingdom is not from here.” Pilate asked him, “So you are a king?” Jesus answered, “You say that I am a king. For this I was born, and for this I came into the world, to testify to the truth. Everyone who belongs to the truth listens to my voice.”

Reflection        Power from above. Power from within. Power exercising violence and promoting fear. Power exercising compassion and promoting faith. Power over. Power with. Pilate and Jesus come from and stand in distinctly different kingdoms. It is no wonder they make no sense to each other, answering questions with questions and leaving us wrestling with words much as pundits wrangle with political positions.

I believe Jesus would roll his eyes, shrug his shoulders and walk away in frustration if he googled the lectionary texts for today and read, “Last Sunday After Pentecost, Christ the King.” Can you hear him sighing, “Two thousand years later and they still want to dress me up in regal robes and weigh me down with an Imperial Crown.  My kingdom is not from this world.”

Which begs another question, “What is a kingdom?” A kingdom is a grouping of individual life forms that share fundamental characteristics in common. We learned that in middle school science. There are five biological kingdoms; animals, plants, fungi, and protozoa and eucaryotic algea. Which begs the next question, “What are the fundamental characteristics that distinguish Jesus’ kingdom from Pilate’s?”

Jesus’ kingdom is  founded in the Law of Moses that provides five instructions for how people are  to relate with God and five more directions for how they are to treat one another; the Ten Commandments.  Jesus refines Moses’ Law in his famous sermon on the upside down beatitudes which proscribe preferential treatment to the most vulnerable; the poor, the meek, the mourning, the hungry, the merciful, the good hearted, the peacemakers and those persecuted for being good hearted. (Matt 5.3-10)

When we imagine Jesus’ kind of kingdom, we must admit it does not sound like any kingdom from here today. Anyone who calls him or herself king today would be flanked by body guards, riding in a black bulletproof SUV to an exclusive state dinner, which would be out of this world in only one way, ninety nine percent of the people would not be invited.

The single-most distinguishing quality of Jesus’ kingdom is the gift of the Spirit of God risen in us all. Jesus, the Christ, governs within us, not over us. This stands in stark contrast to the conventional role of king, ruler or  sovereign like Pilate who claims ultimate authority over the people. But Jesus ministry is all about freeing and empowering the people, restoring the least, the lost and the lonely to wellness so they can fully and freely participate in their community. Everyone counts. Everyone votes because the Spirit of God is with everyone.

Truly, Jesus’ kingdom is not from this world because if it were we would be fighting to prove his power over others.

If you found this post to be meaningful please share by clicking on icons below. Thank you.
Posted by Debra Asis at 8:22 AM No comments: