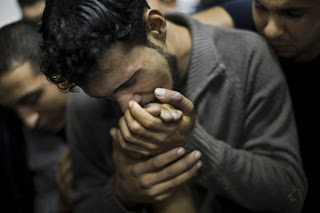 Luke 11:1-13     Jesus was praying in a certain place, and after he had finished, one of his disciples said to him, "Lord, teach us to pray, as John taught his disciples." He said to them, "When you pray, say:
Father, hallowed be your name.
Your kingdom come.
Give us each day our daily bread.
And forgive us our sins,
for we ourselves forgive everyone indebted to us.
And do not bring us to the time of trial."

And he said to them, "Suppose one of you has a friend, and you go to him at midnight and say to him, `Friend, lend me three loaves of bread; for a friend of mine has arrived, and I have nothing to set before him.' And he answers from within, `Do not bother me; the door has already been locked, and my children are with me in bed; I cannot get up and give you anything.' I tell you, even though he will not get up and give him anything because he is his friend, at least because of his persistence he will get up and give him whatever he needs.
"So I say to you, Ask, and it will be given you; search, and you will find; knock, and the door will be opened for you. For everyone who asks receives, and everyone who searches finds, and for everyone who knocks, the door will be opened. Is there anyone among you who, if your child asks for a fish, will give a snake instead of a fish? Or if the child asks for an egg, will give a scorpion? If you then, who are evil, know how to give good gifts to your children, how much more will the heavenly Father give the Holy Spirit to those who ask him!"
Reflection    Can you imagine the disciples, a motley crew kicking up a cloud of dust, as they return from wherever they were while Jesus visited Martha and Mary and find Jesus “in a certain place” praying? Can you see them, some lying some sitting in the shade of a drooping tree, waiting for Jesus? Can you hear their grovelly conversation? “You never know where you are going to find him. He just wanders off and prays.” “He prays a lot.” “I wonder if he prays the formal prayers and psalms the Levites pray in the Temple?” “I don’t know. He seems spontaneous. Prays whenever he wants, where ever he is.“ “Do you suppose he prays the way John does?” “Why don’t you ask him?”
We’ll never know which one of the disciples said to Jesus, “Lord teach us to pray, as John taught his disciples.” We do know several things. Jesus taught the disciples to pray a formal prayer and to directly address God. He understood the relationship between the disciples and God whom they addressed in prayer was profoundly personal, like that of a child and it’s father; a child completely dependent on her father to keep her “from times of trial,” to forgive her missteps and mistakes, to provide for her need in the present moment. There is no more need for the disciple to go on and on telling God what to do and how to do it than there is for a child to tell her father how to provide for her.
Still, there is more than the external form and repetition of the words (which I have to admit for me sometimes can fly out of my mouth much like my eye blinks in a puff of wind).  Rather than outlining a strict regimen for saying their prayers (such as at the three times each day of Temple sacrifice) or instructing the disciples to pray in designated holy places, Jesus used two allegories or stories to describe the interior state of consciousness the disciples (and we) are to bring to our prayers; bold persistance and innocent receptivity.
We are to be bold in directly addressing God, no less so than calling on a friend at midnight and demanding help. (How would you respond if I called and asked you to bring me a loaf of bread and bottle of wine in the middle of the night?) We are to be persistent in expecting a response, and unshakable in believing that it will be good. (I would only call you if I knew I could count on your goodness and patience). At the same time we are to be innocent as children, honest and guileless, neither offending nor taking offense. (I call and ask without having an expectation for a particular outcome). Because into this state of open-hearted receptivity we receive the greatest gift, God’s own Holy Spirit, and God’s kingdom is come.