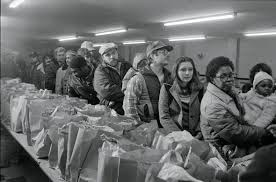 Ezekiel 36:24-28         Say to the house of Israel, Thus says the Lord God: I will take you from the nations, and gather you from all the countries, and bring you into your own land. I will sprinkle clean water upon you, and you shall be clean from all your uncleannesses, and from all your idols I will cleanse you. A new heart I will give you, and a new spirit I will put within you; and I will remove from your body the heart of stone and give you a heart of flesh. I will put my spirit within you, and make you follow my statutes and be careful to observe my ordinances. Then you shall live in the land that I gave to your ancestors; and you shall be my people, and I will be your God.
Luke 24:1-12        On the first day of the week, at early dawn, the women who had come with Jesus from Galilee came to the tomb, taking the spices that they had prepared. They found the stone rolled away from the tomb, but when they went in, they did not find the body. While they were perplexed about this, suddenly two men in dazzling clothes stood beside them. The women were terrified and bowed their faces to the ground, but the men said to them, "Why do you look for the living among the dead? He is not here, but has risen. Remember how he told you, while he was still in Galilee, that the Son of Man must be handed over to sinners, and be crucified, and on the third day rise again." Then they remembered his words, and returning from the tomb, they told all this to the eleven and to all the rest. Now it was Mary Magdalene, Joanna, Mary the mother of James, and the other women with them who told this to the apostles. But these words seemed to them an idle tale, and they did not believe them. But Peter got up and ran to the tomb; stooping and looking in, he saw the linen cloths by themselves; then he went home, amazed at what had happened.

I have never seen an angel nor have I heard a booming voice from heaven. But once in my prayers I had an experience of Jesus that was more real than anything I have ever seen with my eyes or touched with my hands. In my heart of hearts I heard Jesus say, “Follow me.” And I stepped behind him. He said, “Come closer.” And I did. And he said, “Closer.” And I answered, “If I come any closer I will step on your heels.” And he said “Closer.” And I stepped into Him and vanished, except I wasn’t gone. What was gone was my sense of separation. I couldn’t see him anymore. I couldn’t sense where I ended and He began. I just knew that He was closer to me than my own breath and that I was so close to Him that there was nothing between us.

I tell you this story because many of you also have stories - stories of how you have been touched by God - and unless we tell our stories we are not living out our lives as the apostles sent to share the Good News.  You see like Mary Magdalene and the other women our stories are meant to be told and retold as reminders that God is not dead. God is alive and with us  - risen right now in our hearts of flesh.

This is resurrection; our current and ongoing awakening into new and transformed life. You see Jesus did not come to bulldoze the Roman Empire and bury the religious officials in order to rescue regular folks like us into some future utopia. Jesus came as a common man whose on the ground ministry to the sick and rejected gathered a movement of ordinary folks, people whose hearts were broken open and whose spirits were renewed by Jesus’ message of dignity and hope for all people. But the political and religious operatives of his day were threatened by Jesus’ revolutionary message and the crowds he was gathering because it challenged the status quo (read - the officials positions of power and privilege).  So, the authorities counted Jesus a criminal and crucified him between two other criminals.

Jesus does not protest. He allies himself with the least, the last and the lonely, the broken, the betrayed and the alien, all those ordinary people like me and you whose vision of dignity and hope for all people pose a threat to the status quo. Even though Jesus’ revolutionary vision leads to his brutal execution, his Spirit cannot be extinguished because it rises again and again and again in the fleshy hearts of humankind.

On Easter we join Mary Magdalene, Joanna, Mary the mother of James and the other women pondering Ezekiel’s words in the caverns of our hearts, “… A new heart I will give you, and a new spirit I will put within you; and I will remove from your body the heart of stone and give you a heart of flesh…” This is resurrection life. It is not put off for some distant time. Resurrection is now. We are the people of God because the Spirit and fleshy heart of Jesus is resurrected within us again, and again and again, always,  and right now.


Alleluia Christ is risen…. The Lord is risen indeed. Alleluia!

If you found this post to be meaningful please share by clicking on icons below. Thank you.
Posted by Debra Asis at 10:16 AM No comments: