Gospel Text for the Great Vigil of Easter 15 April 2017 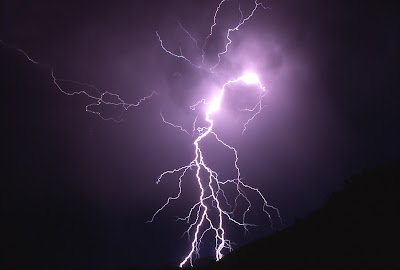 Matthew 28:1-10        After the sabbath, as the first day of the week was dawning, Mary Magdalene and the other Mary went to see the tomb. And suddenly there was a great earthquake; for an angel of the Lord, descending from heaven, came and rolled back the stone and sat on it. His appearance was like lightning, and his clothing white as snow. For fear of him the guards shook and became like dead men. But the angel said to the women, "Do not be afraid; I know that you are looking for Jesus who was crucified. He is not here; for he has been raised, as he said. Come, see the place where he lay. Then go quickly and tell his disciples, 'He has been raised from the dead, and indeed he is going ahead of you to Galilee; there you will see him.' This is my message for you." So they left the tomb quickly with fear and great joy, and ran to tell his disciples. Suddenly Jesus met them and said, "Greetings!" And they came to him, took hold of his feet, and worshiped him. Then Jesus said to them, "Do not be afraid; go and tell my brothers to go to Galilee; there they will see me.”

Reflection       Sometimes things do not turn out the way we imagine. Early in the morning as the first day of the week was dawning, the two Marys go to the tomb.  But nothing is as they imagined. Instead of it being a still, dark, quiet morning there is a “great earthquake and an angel of the Lord appears like lightening with clothing white as snow.”

The angel of the Lord says “Do not be afraid; I know that you are looking for Jesus who was crucified”.  Then the angel directs the women to look into empty space, see the place where he was laid, “he is not here….” In the very experience of God’s absence there is a message of hope, “he is risen…he is not here.”

Hope, the gift of Easter, is found in absence. Hope is in the mystery. Hope is the surprising light found in the midst of darkness. The other day I was talking with a seventy six year old woman who was diagnosed with rheumatoid arthritis when she was eighteen years old. Her hands and feet, shoulders and knees were torturously disfigured, which only made what she said to me even more astonishing. “It turns out I am grateful for my rheumatoid arthritis ( a terribly painful and debilitating disease). Without it I probably would never have left my dysfunctional family of origin in their tiny impoverished midwest town, met so many fabulous doctors and healers, and learned how to pray and put my faith in God rather than my body and choose to live my life to the fullest.” Tears took the place of the words I could not get out. Tears of awe and gladness exchanged places with tears of of sorrow. Sometimes things do not turn out the way we imagine, and so we proclaim, “Alleluia, Christ is risen!”

If you found this post to be meaningful, please share by clicking on icons below. Thank you!
Posted by Debra Asis at 1:46 PM No comments: