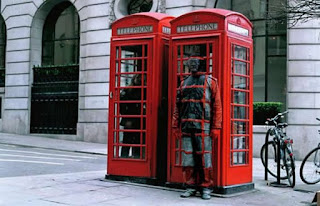 Luke 7:1-10        After Jesus had finished all his sayings in the hearing of the people, he entered Capernaum. A centurion there had a slave whom he valued highly, and who was ill and close to death. When he heard about Jesus, he sent some Jewish elders to him, asking him to come and heal his slave. When they came to Jesus, they appealed to him earnestly, saying, "He is worthy of having you do this for him, for he loves our people, and it is he who built our synagogue for us." And Jesus went with them, but when he was not far from the house, the centurion sent friends to say to him, "Lord, do not trouble yourself, for I am not worthy to have you come under my roof; therefore I did not presume to come to you. But only speak the word, and let my servant be healed. For I also am a man set under authority, with soldiers under me; and I say to one, `Go,' and he goes, and to another, `Come,' and he comes, and to my slave, `Do this,' and the slave does it." When Jesus heard this he was amazed at him, and turning to the crowd that followed him, he said, "I tell you, not even in Israel have I found such faith." When those who had been sent returned to the house, they found the slave in good health.

Reflection        “I am not worthy to have you come under my roof.” It is unthinkable that a centurion could say those words to Jesus. Roman soldiers were chosen from the wealthiest and most privileged citizens. When a man swore the ‘sacramentum,’ an oath of allegiance to the Roman Empire, his status changed from citizen to soldier. From then on he was no longer a citizen guided by his own conscience and he bore no personal responsibity for his actions.  All of his actions were subject to the will of his commander.  He would have been trained to feel neither cruelty nor compassion and to unequivocally execute orders. Likewise he expected those under his command to obey orders. As he said to Jesus, “I also am a man set under authority, with soldiers under me.” He knew his place in the chain of authority and in that chain there was no room for conscience or compassion. In other words, once he had sworn the oath and received his armor the centurion’s will was no longer his own. So, what happened?

Apparently training to be a Roman soldier had not wiped all compassion out of the centurion. He was a man known for loving the Jewish people and for building their synagogue. But, he was also a man under the authority of the Roman empire.  He was commissioned to keep peace and eliminate revolutionaries. There must have been an all out war inside the centurion the day Jesus showed up in Capernaum. “To whom shall I attribute greater authority? The Roman empire or this pecular Jewish preacher?” I wonder if the centurion surprised himself when he sent some Jewish elders to ask Jesus to “come and heal his highly valued slave who was close to death.” After all, even Jesus was amazed!

Not only did the centurion recognize Jesus’ power and ask for his help he did what was unheard of - he humbled himself. Rather than relying on his power and privilege and peacock plumes to get what he wanted, he said to Jesus, “I am not worthy to have you come under my roof; therefore I did not presume to come to you.” By every standard the centurion would have been considered dignified and worthy of respect. Yet in spite of his title, power and peacock plumes, he decided in favor of the poor, the hungry and the reviled. The centurion decided in favor of his slave and in so doing he allied himself with Jesus. And Jesus was amazed.
Violating every convention and putting himself at personal risk, the centurion chose the way of blessing the least among us. In two thousand years the need to do likewise has not diminished. Much as  the centurion we are people “set under authority” and sent to do the business of God, sent to decide in favor of the poor, the hungry and the reviled.  Let’s stop limping along.  Let's stop the social, political and religious wars and get on with the business of God deciding "for" the invisible people.

Posted by Debra Asis at 2:18 PM No comments: