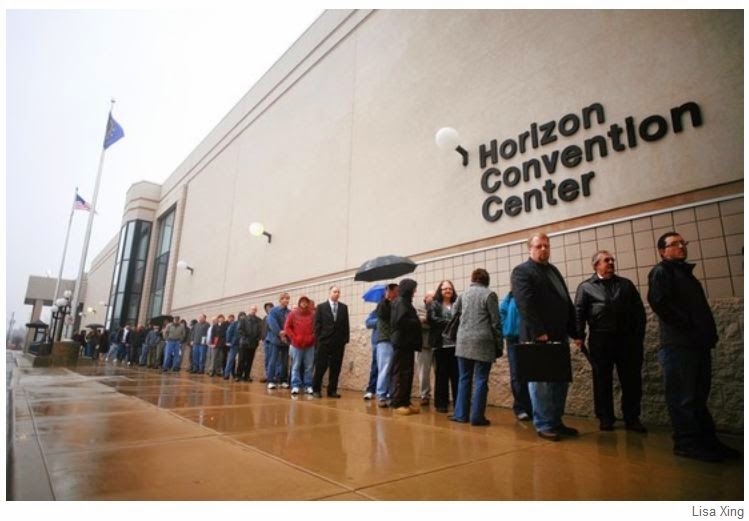 Matthew 20:1-16       esus said, "The kingdom of heaven is like a landowner who went out early in the morning to hire laborers for his vineyard. After agreeing with the laborers for the usual daily wage, he sent them into his vineyard. When he went out about nine o'clock, he saw others standing idle in the marketplace; and he said to them, `You also go into the vineyard, and I will pay you whatever is right.' So they went. When he went out again about noon and about three o'clock, he did the same. And about five o'clock he went out and found others standing around; and he said to them, `Why are you standing here idle all day?' They said to him, `Because no one has hired us.' He said to them, `You also go into the vineyard.' When evening came, the owner of the vineyard said to his manager, `Call the laborers and give them their pay, beginning with the last and then going to the first.' When those hired about five o'clock came, each of them received the usual daily wage. Now when the first came, they thought they would receive more; but each of them also received the usual daily wage. And when they received it, they grumbled against the landowner, saying, `These last worked only one hour, and you have made them equal to us who have borne the burden of the day and the scorching heat.' But he replied to one of them, `Friend, I am doing you no wrong; did you not agree with me for the usual daily wage? Take what belongs to you and go; I choose to give to this last the same as I give to you. Am I not allowed to do what I choose with what belongs to me? Or are you envious because I am generous?' So the last will be first, and the first will be last.”
Reflection       My fair share. What is my fair share. That was the first thing I wondered when reading this parable. But what about the generous landowner? What about all the people who, much as the landowner, look for opportunities to be generous?
I turned to Charity Navigator to find giving statistics for Americans in 2013. http://www.charitynavigator.org/index.cfm?bay=content.view&cpid=42#.VBy4wl7Zdg0
In 2013 the Americans’ total giving to charitable organizations was $335.17 billion (about 2% of the GDP). Individuals (not corporations) gave 72% of it, roughly $240.6 billion to religious institutions, education, human services, health agencies and charities that focus on the environment or animals. This does not include monies given to assist with natural disasters and tragedies or handed out on the street. Like the landowner in Matthew’s text, Americans are generous.
What does it mean to be a generous individual? According to Wikipedia’s definition, generosity or largess is “a habit of giving without expecting anything in return… Generosity is not solely based on one's economic status, but instead, includes the individual's pure intentions of looking out for society's common good and giving from the heart. Generosity should reflect the individual's passion to help others.”
Sounds great. But how is Christian generosity distingushed from being a good citizen? Sacrifice. The word is sacrifice. It is at the heart of our Christian tradition. Paul counsels the Romans, “I appeal to you therefore, brethren, by the mercies of God, to present your bodies as a living sacrifice, holy and acceptable to God…” (Ro 12.1) In Luke 18, Jesus challenges a rich young man to sell everything. Mincing no words, Jesus said to his disciples, "If any man would come after me, let him deny himself and take up his cross and follow me. For whoever would save his life will lose it, and whoever loses his life for my sake will find it.” (Matt 16.24-25)
These are hard words. Apparently, sacrifice is generosity on steroids. It is more than having good intentions, a loving heart, writing checks and hoping for the good of all people. Sacrifice is muscle on the bones of generosity that compels us to be willing to earn less (as did the land owner) in order to give more to others. Sacrifice is deciding to do less to sure up our personal kingdoms in order to build God’s kingdom on earth right now. Sacrifice is holding nothing back until everybody on the land gets a full days’ wage


If you found this post to be meaningful please share with friends by clicking on the icons below. Thank you.
Posted by Debra Asis at 3:31 PM No comments: