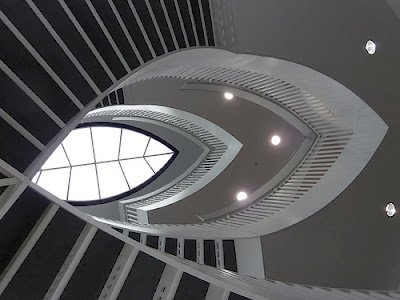 Luke 20:27-38       Some Sadducees, those who say there is no resurrection, came to Jesus and asked him a question, "Teacher, Moses wrote for us that if a man's brother dies, leaving a wife but no children, the man shall marry the widow and raise up children for his brother. Now there were seven brothers; the first married, and died childless; then the second and the third married her, and so in the same way all seven died childless. Finally the woman also died. In the resurrection, therefore, whose wife will the woman be? For the seven had married her."
Jesus said to them, "Those who belong to this age marry and are given in marriage; but those who are considered worthy of a place in that age and in the resurrection from the dead neither marry nor are given in marriage. Indeed they cannot die anymore, because they are like angels and are children of God, being children of the resurrection. And the fact that the dead are raised Moses himself showed, in the story about the bush, where he speaks of the Lord as the God of Abraham, the God of Isaac, and the God of Jacob. Now he is God not of the dead, but of the living; for to him all of them are alive."
Reflection        Could it be that two thousand years ago Jesus was saying to the Sadduces and whoever else was listening that there would come a time when women would not be considered property to be transferred between the hands of brothers? Could it be that Jesus was looking square into the face of the patriarchy and saying, “Your question about the sexual rights of brothers with regard to their widowed sister-in-law misses the mark? You are blind to the ways of God of the living because God of the living does not rely on humanly contrived institutions to protect humanity. God of the living gives life eternally to all people; women, men, Jews, nonJews, married, unmarried.” Could it be that Jesus was declaring, “God gives life that does not depend on human understanding or human institutions?”
The Sadduces conspired to entrap Jesus. Their motive was the same when they asked Jesus the question about paying taxes to Rome. But Jesus rises to a ten thousand foot above the ground persective. Jesus claims dignity for all people and righteousness in all relationships... right here, right now, on earth among the living. He  makes the point that this really is a matter of choosing life or death.
Jesus exposes the Sadduces‘ debauched protestations (alleging to protect widows) for what they really were, heartless attempts to rule and exert power over others., including Jesus. But Jesus would have none of it.   He cuts to the heart of the matter, “God is God not of the dead but of the living.” The people of God are with God, “for all of them are alive in God” because God wills life,  but the way of the rule mongering Sadduces depends on death. The question is, which will you choose, the way of life or the way of death?
Please share with friends by clicking on the icons below.
Posted by Debra Asis at 9:48 AM No comments: