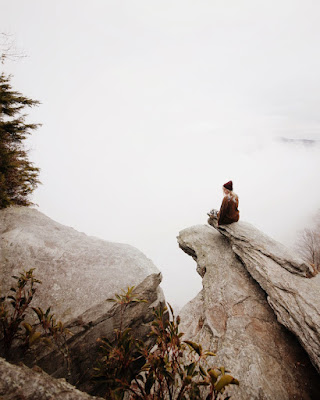 Mark 12:41-44        He sat down opposite the treasury, and watched the crowd putting money into the treasury. Many rich people put in large sums. A poor widow came and put in two small copper coins, which are worth a penny. Then he called his disciples and said to them, ‘Truly I tell you, this poor widow has put in more than all those who are contributing to the treasury. For all of them have contributed out of their abundance; but she out of her poverty has put in everything she had, all she had to live on.’
Reflection        There is nothing comfortable about being people of faith because it means standing up, saying “Yes,” and stepping out having absolutely no idea where we are going, never mind how we will get there. This in not merely uncomfortable, it feels fraught with danger. Ah, but we are people of faith. We hale from a long line of foolishly faithful risk takers. This is our story.

Consider our twelve times twelve great grandfather Abram who was later named Abraham which means “the Father of many nations.” An ordinary married man, at the ripe young age of 75, Abram stands up, says yes answering God’s call to leave his country to go to he had no idea where and be the father of many nations even though he and his wife Sarai had no children. For twenty five years he and Sarai wander somewhere between Syria and Egypt receiving repeated promises from God that his “seed will inherit the land.” What kind of faith does it require for Abraham to wait until he is 100 years old for his son Isaac to be born and then without hesitation obey God’s command to sacrifice him?  Which ultimately he is not required to do because God substitutes a ram. This is a story about faith.  There is nothing comfortable about being people of faith because we are asked to say yes and get moving and do what seems impossible.

Or think about Jesus rising up from the baptismal waters of the Jordan river, hearing a voice from heaven, “You are my son, with you I am well pleased,” stepping out of the river and immediately being driven onto the desert where he fasts for forty days and then is tempted to create bread out of stones to relieve his own hunger, leap from a pinnacle and rely on angels to catch him and kneel before Satan in return for all the kingdoms of the world. All three temptations represent the use of power for personal gain, and how does Jesus respond? He puts his faith in God rather than himself. Jesus turns to the words of scripture rather than succumb to temptation. There is nothing comfortable about being people of faith because we are asked to resist temptations to hedonism, egoism and materialism.

Which brings us to the widow in Luke’s text. In the presence of a crowd of people putting large sums of money into the temple treasury a poor widow rubs two small coins together before putting “everything she has to live on” in the treasury. Immediately we protest, “How could she do that? This is neither reasonable nor far-sighted. Surely God does not want her to give up everything and starve.” But wait. The poor widow only gave up two coins. Surely she knows she has something more to live on, in fact something she no doubt is very much aware she depends on. Her faith, her faith in God with her. There is nothing comfortable about being people of faith because we are asked to rely on God for our lives.

Abraham, Jesus and the poor widow have no idea how they are going to do it but they definitely know what they intended to do. Each one choses to live by faith, not by fear. Each one of them is prepared to be surprised by God.

If you found this post to be meaningful please share by clicking on icons below. Thank you.
Posted by Debra Asis at 9:22 AM No comments: