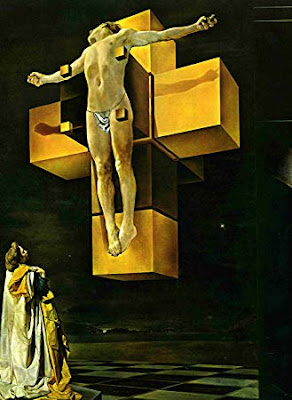 Luke 23:1-49        The assembly of the elders of the people rose as a body and brought Jesus before Pilate. They began to accuse him, saying, "We found this man perverting our nation, forbidding us to pay taxes to the emperor, and saying that he himself is the Messiah, a king." Then Pilate asked him, "Are you the king of the Jews?" He answered, "You say so." Then Pilate said to the chief priests and the crowds, "I find no basis for an accusation against this man." But they were insistent and said, "He stirs up the people by teaching throughout all Judea, from Galilee where he began even to this place.”

When Pilate heard this, he asked whether the man was a Galilean. And when he learned that he was under Herod's jurisdiction, he sent him off to Herod, who was himself in Jerusalem at that time. When Herod saw Jesus, he was very glad, for he had been wanting to see him for a long time, because he had heard about him and was hoping to see him perform some sign. He questioned him at some length, but Jesus gave him no answer. The chief priests and the scribes stood by, vehemently accusing him. Even Herod with his soldiers treated him with contempt and mocked him; then he put an elegant robe on him, and sent him back to Pilate. That same day Herod and Pilate became friends with each other; before this they had been enemies.

Pilate then called together the chief priests, the leaders, and the people, and said to them, "You brought me this man as one who was perverting the people; and here I have examined him in your presence and have not found this man guilty of any of your charges against him. Neither has Herod, for he sent him back to us. Indeed, he has done nothing to deserve death. I will therefore have him flogged and release him."
Then they all shouted out together, "Away with this fellow! Release Barabbas for us!" (This was a man who had been put in prison for an insurrection that had taken place in the city, and for murder.) Pilate, wanting to release Jesus, addressed them again; but they kept shouting, "Crucify, crucify him!" A third time he said to them, "Why, what evil has he done? I have found in him no ground for the sentence of death; I will therefore have him flogged and then release him." But they kept urgently demanding with loud shouts that he should be crucified; and their voices prevailed. So Pilate gave his verdict that their demand should be granted. He released the man they asked for, the one who had been put in prison for insurrection and murder, and he handed Jesus over as they wished.

As they led him away, they seized a man, Simon of Cyrene, who was coming from the country, and they laid the cross on him, and made him carry it behind Jesus. A great number of the people followed him, and among them were women who were beating their breasts and wailing for him. But Jesus turned to them and said, "Daughters of Jerusalem, do not weep for me, but weep for yourselves and for your children. For the days are surely coming when they will say, 'Blessed are the barren, and the wombs that never bore, and the breasts that never nursed.' Then they will begin to say to the mountains, 'Fall on us'; and to the hills, 'Cover us.' For if they do this when the wood is green, what will happen when it is dry?"
Two others also, who were criminals, were led away to be put to death with him. When they came to the place that is called The Skull, they crucified Jesus there with the criminals, one on his right and one on his left. Then Jesus said, "Father, forgive them; for they do not know what they are doing." And they cast lots to divide his clothing. And the people stood by, watching; but the leaders scoffed at him, saying, "He saved others; let him save himself if he is the Messiah of God, his chosen one!" The soldiers also mocked him, coming up and offering him sour wine, and saying, "If you are the King of the Jews, save yourself!" There was also an inscription over him, "This is the King of the Jews.”

One of the criminals who were hanged there kept deriding him and saying, "Are you not the Messiah? Save yourself and us!" But the other rebuked him, saying, "Do you not fear God, since you are under the same sentence of condemnation? And we indeed have been condemned justly, for we are getting what we deserve for our deeds, but this man has done nothing wrong." Then he said, "Jesus, remember me when you come into your kingdom." He replied, "Truly I tell you, today you will be with me in Paradise.”

It was now about noon, and darkness came over the whole land until three in the afternoon, while the sun's light failed; and the curtain of the temple was torn in two. Then Jesus, crying with a loud voice, said, "Father, into your hands I commend my spirit." Having said this, he breathed his last. When the centurion saw what had taken place, he praised God and said, "Certainly this man was innocent." And when all the crowds who had gathered there for this spectacle saw what had taken place, they returned home, beating their breasts. But all his acquaintances, including the women who had followed him from Galilee, stood at a distance, watching these things.

Reflection        Last Sunday during our forum on Jewish and Christian Values one of Rabbi Helen’s M’kor Hayim congregants asked, “The second commandment instructs us to make no graven images or idols of God. How does that fit with the crucifixes we see in many Christian churches and homes?” A great question especially as we walk with Jesus to Jerusalem this Holy week and the image of Jesus nailed to a cross looms high above us. The question gave me pause and reminded me of an experience I had when assigned to a field education parish as a first year seminarian.

The church was an ultramodern building nestled in a sumptuous Marin County residential setting.  Passing through a lush garden, mesmerized by the water music of a fountain mixed with the fragrance of perennial  blossoms I was stopped dead in my tracks as I passed through the sanctuary doors and came face to face with a twenty plus foot contemporary painted wood sculpture of a Mexican/Spanish styled Jesus nailed to a cross, hanging in the chancel, high above the altar. Thankfully no one else was present as I am sure my gasp was audible.

“Oh dear. How can I be in this place? How can I gaze at this enormous dead Jesus every week?” Looking for a place to escape, I anxiously searched the sanctuary. It was stark, no ornament except the regnant crucifix. After a time my eyes settled on a line of seats mostly hidden in the shadows far below the imposing sculpture. I actually felt my breath release as I realized, it would be on one of those seats that I would sit with the grand graven image well above and behind me. “Thank you God.”

It took several months for me to screw up the courage to ask the rector, my supervisor, how he could live with the daunting sculpture of dead Jesus reigning sovereign from on high above his head? He paused for awhile before responding. “Hanging there above us is a constant reminder of what we humans are capable of at our worst. We should never forget our potential for evil, the killing of innocents, all the ways we do so by our actions and inactions every single day.” And that reframe turned me around.

We are not worshipping the mangled body of a god and thereby violating the second commandment. No. We contemplate the unsettling sculpture of love crucified to remind ourselves how easily we turn away from good, misuse our position, power or privilege, then either willfully or unwittingly execute evil and elevate it to regal heights. No wonder we do not like to look at the vexing sculpture of an innocent man’s dead body nailed to a cross. It brings us face to face with an inconvenient truth. Just like the crowds of people who follow Jesus as well as the religious leaders and public officials, ever so easily we too can be swept up in the emotional fray of a moment, we too give way and  shamelessly wheel around from following good to executing even the most innocent among us, we crucify love.

Too often I catch myself in the rear-view mirror hurrying on my all-important way rather than pausing to offer a handful of help and hope to the neighbor or stranger whom I fail to love as I love my self. Far too often I leap past disconcerting news stories rather than face the horrors that are happening just a few miles south of my comfortable home. No, I do not worship a graven image, but far too often I make an idol of myself; fashioning my security, my safety, my esteem,  my power, and my control into five demanding deities and crucify love. How about you? Lord have mercy upon us  and incline our hearts to keep your law.

If you found this post to be meaningful please share by clicking on icons below. Thank you.
Posted by Debra Asis at 9:46 AM No comments: