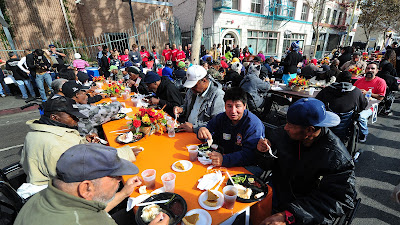 Luke 16:19-31        Jesus said, "There was a rich man who was dressed in purple and fine linen and who feasted sumptuously every day. And at his gate lay a poor man named Lazarus, covered with sores, who longed to satisfy his hunger with what fell from the rich man's table; even the dogs would come and lick his sores. The poor man died and was carried away by the angels to be with Abraham. The rich man also died and was buried. In Hades, where he was being tormented, he looked up and saw Abraham far away with Lazarus by his side. He called out, `Father Abraham, have mercy on me, and send Lazarus to dip the tip of his finger in water and cool my tongue; for I am in agony in these flames.' But Abraham said, `Child, remember that during your lifetime you received your good things, and Lazarus in like manner evil things; but now he is comforted here, and you are in agony. Besides all this, between you and us a great chasm has been fixed, so that those who might want to pass from here to you cannot do so, and no one can cross from there to us.' He said, `Then, father, I beg you to send him to my father's house-- for I have five brothers-- that he may warn them, so that they will not also come into this place of torment.' Abraham replied, `They have Moses and the prophets; they should listen to them.' He said, `No, father Abraham; but if someone goes to them from the dead, they will repent.' He said to him, `If they do not listen to Moses and the prophets, neither will they be convinced even if someone rises from the dead.'"
Reflection      Three dead men. One wisdom tale. What is Jesus up to? Every hour of every day Lazarus dies a bit more as dogs lick his wounds until at last the unfathomable happens, “The poor man …. is carried away by the angels to be with Abraham.” Meanwhile the rich man lives in the lap of luxury; well fed and dressed in Tyrian purple, an expensive dye extracted from shellfish first produced by the Phoenician city of Tyre two thousand years before Jesus walked to Jerusalem. By all measures the man wearing purple is the image of success until he dies, is given a proper burial, and the  unfathomable happens; he finds himself irredeemably tormented, separated from Abraham by an impassable chasm.

Which leads us to the third dead man, Abraham, Father of Judaism, Christianity and Islam, whose hospitality and generosity are immortalized in the tale of him lavishly entertaining three strangers, angels in disguise.(Gen 18.2-8) Like the rich man in Jesus’ parable, Abraham is a wealthy man. Unlike the rich man in purple whose actions are singularly self-serving, Abraham is generous and acts for the good of others. When the rich man wearing purple dies and sees Lazarus with Abraham, he does not pause to reflect on his actions, how day after day he ignored suffering Lazarus, he does not ask for forgiveness nor turn around to amend his ways. Instead, the self-important man still tries to wield power over Lazarus to get a sip of comfort.

I believe it is the rich man’s attitude of entitlement ( not his wealth) that is the source of his torment. His singular concern with his security, safety, status, esteem, power and control makes it impossible for him to connect with the generosity and hospitality of God as embodied by Abraham. It is the rich man’s attitude, his frame of mind, that prevents him from being in right relationship with God or anyone else.

By contrast Abraham is the exemplar of what living in right relationship with God looks like. In fact, Christianity, Judaism and Islam stand together affirming Abraham as the earthly expression of God’s instruction that people who enjoy power, privilege and resource are to care for the powerless, the poor and the needy. This is what bridges the gap between the rich and the poor. This is what God’s economy looks like.

Which begs the question, what are we doing to redistribute the power, privilege and resource we are freely given to provide for those with so much less? What are we doing to insure there is no chasm between God’s boundless generosity and ours?

Posted by Debra Asis at 9:40 AM No comments: