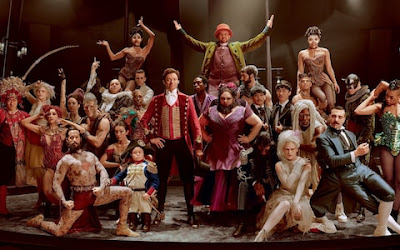 Mark 1.21-28        Jesus and his disciples went to Capernaum; and when the sabbath came, he entered the synagogue and taught. They were astounded at his teaching, for he taught them as one having authority, and not as the scribes. Just then there was in their synagogue a man with an unclean spirit, and he cried out, “What have you to do with us, Jesus of Nazareth? Have you come to destroy us? I know who you are, the Holy One of God.” But Jesus rebuked him, saying, “Be silent, and come out of him!” And the unclean spirit, convulsing him and crying with a loud voice, came out of him. They were all amazed, and they kept on asking one another, “What is this? A new teaching—with authority! He commands even the unclean spirits, and they obey him.” At once his fame began to spread throughout the surrounding region of Galilee.

Reflection        The musical extravaganza, The Greatest Showman, roughly relays the story of P.T.Barnum’s rise from impoverished childhood to founding the one hundred and forty six year continuously running big top Barnum circus. From the beginning Barnum breached polite society’s boundaries. Daring to burst beyond his birthright boundary Barnum invites society’s untouchables; a dwarf, a bearded lady, siamese twins, as well as those with unusual talents, flying on a trapeze, dancing with elephants, into center stage, dresses them in glittering costumes and gives them the opportunity to sing and dance and claim their lives in the limelight, instead of in the shadows.

Much like Jesus, P.T. Barnum (notwithstanding his considerable human flaws) reaches out to people whom social, political and religious convention deems unworthy to be seen, heard or included. Like Jesus, Barnum bridges the boundaries of the status quo by seeing value in the outcast and bringing it to light. I believe this is what Jesus was doing when he walked into the synagogue in Capernum, taught “as one with authority” and then proceeds to heal a man possessed “with an unclean spirit.”

In the first place, Jesus is simply not authorized to enter the synagogue and teach. We have no evidence that he succeeded through the Sanhedrin rabbinic ordination process, nevertheless Jesus enters the synagogue, teaches and the people are astounded. This is the first boundary we watch Jesus bind.

The second boundary has to do with orthodox Jewish tradition. As an observant Jew Jesus understands his duty to maintain purity in order to approach God. Yet, he reaches out to a man possessed by an unclean spirit. By healing the man Jesus is breaching a central religious boundary and making himself unclean. If that is not enough to provoke ire, Jesus also crosses a third boundary by daring to work on the sabbath. The issue that undergirds most controversies about boundaries is really that of authority. Who has the privilege and power to define boundaries? or borders? or gerrymanders?  What is the source of their authority?

In secular culture there are institutions devoted to credentialing people, conferring on them the privilege and power to teach or govern, to make decisions, exercise judgments and define boundaries. We have already noted that Jesus’ authority does not come from social or political institutions. Jesus’ authority is rooted in his relationship with God. We hear this clearly in John’s gospel when, after healing the blind, the lame and the paralyzed, once again on the sabbath, the Jewish officials begin to persecute Jesus, and he says to them, ‘Very truly I tell you, the Son can do nothing on his own; for whatever the Father does, the Son does likewise… for just as the Father has life in himself he has granted the Son also to have life in himself and he has given him authority to execute judgment, because he is the Son of Man.” (John 5.19, 26) Oops, another boundary is breached with Jesus claiming his identity with God.

Much as the nineteenth century 'invisible' people were invited to step out of the shadows cast on them by polite societies’ judgments into the limelight of P.T. Barnum’s circus stage we too are invited to step out of the shadows of social, political and religious belief systems and boundaries. Today we are invited to step onto center stage and follow Jesus’ example, the way of direct experience of Spirit.  I believe the heart of Jesus teaching is showing us a new way of finding our authority and claiming our identity in relationship with God. When we turn away from the shadows cast by social, political and religious systems, we find ourselves on center stage, aligned in the spirit of God and imbued with the authority to sing and dance and claim our with God lives.  Come alive!

If you found this post to be meaningful please share by clicking on icons below. Thank you.
Posted by Debra Asis at 8:06 AM No comments: