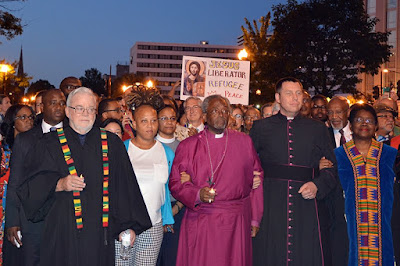 Bishop Michael Curry, center, leads an interfaith march during a Reclaiming Jesus event in Washington on May 24, 2018. RNS photo by Jack Jenkins

Now the Lord came and stood there, calling as before, “Samuel! Samuel!” And Samuel said, “Speak, for your servant is listening.” Then the Lord said to Samuel, “See, I am about to do something in Israel that will make both ears of anyone who hears of it tingle. On that day I will fulfill against Eli all that I have spoken concerning his house, from beginning to end. For I have told him that I am about to punish his house forever, for the iniquity that he knew, because his sons were blaspheming God, and he did not restrain them. Therefore I swear to the house of Eli that the iniquity of Eli’s house shall not be expiated by sacrifice or offering forever.”

Samuel lay there until morning; then he opened the doors of the house of the Lord. Samuel was afraid to tell the vision to Eli. But Eli called Samuel and said, “Samuel, my son.” He said, “Here I am.” Eli said, “What was it that he told you? Do not hide it from me. May God do so to you and more also, if you hide anything from me of all that he told you.” So Samuel told him everything and hid nothing from him. Then he said, “It is the Lord; let him do what seems good to him.”

As Samuel grew up, the Lord was with him and let none of his words fall to the ground. And all Israel from Dan to Beer-sheba knew that Samuel was a trustworthy prophet of the Lord.

Reflection      This is the story of God and God’s people. It is a story of call and response, and in order to respond we must first be listening which is why Eli counsels Samuel, “Go, lie down; and if (the Lord) calls you, you shall say, ‘Speak, Lord, for your servant is listening.’ But listening is not enough. Like Samuel we must also transfer alliance from our worldly teachers and authorities to the presence of God with us, even when it means speaking hard truths out loud, even to our teachers and authorities as did Samuel with Eli.

Recently 1.9 billion people were blessed to listen to the call of a present day prophet, the Episcopal Church’s own Presiding Bishop Michael Curry, who preached at the wedding of Prince Harry and Meghan Markle in what one news source described as “a moment of divine intervention.”

The progressive Christian leader Jim Wallis wrote, “God used a royal wedding to have the gospel preached probably to the largest audience at one time.” Then speaking about his commitment to join with faith leaders to promote the Reclaiming Jesus Movement Bishop Curry explained, “My hope and prayer is that what we’re really doing is helping the average Christian person of faith find their voice. We’re trying to find a way to bring people together and the values that we share is our starting place for doing that. We don’t tell people how to vote,” Curry said. “We don’t tell people exactly what policies they must stand for. We identify what are the values that will guide you in your life. But the rest? That’s between you and God.”

He concludes, “In these incredibly polarizing and frankly demoralizing times we need a moral message that’s anchored in faith not ideology and politics.” Essentially Curry is counseling us to transfer our alliance from the voices of politicians, ideologues and the media to the interior voice of the Word God with us, a Word we hear from trustworthy prophets.

Like Samuel I believe our Presiding Bishop is a trustworthy prophet and I pray that “none of his words will fall to the ground.” God is not silent, remote or uninterested even though we may look at our lives or the world in which we live and want to shout, “O God, where are you in this? “ It is time for us to stop listening to media campaigns and political posturing and transfer our alliance to the Word God with us and love our neighbors, especially the ones that are most difficult for us to love.

When we lay down our politics and personal predilections to embody the values proclaimed by our prophets, we too will be trustworthy.