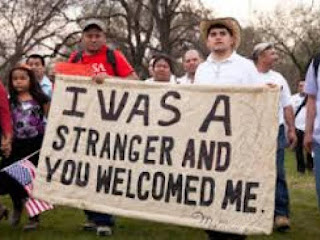 Mark 7:24-37        Jesus set out and went away to the region of Tyre. He entered a house and did not want anyone to know he was there. Yet he could not escape notice, but a woman whose little daughter had an unclean spirit immediately heard about him, and she came and bowed down at his feet. Now the woman was a Gentile, of Syrophoenician origin. She begged him to cast the demon out of her daughter. He said to her, “Let the children be fed first, for it is not fair to take the children’s food and throw it to the dogs.” But she answered him, “Sir, even the dogs under the table eat the children’s crumbs.” Then he said to her, “For saying that, you may go—the demon has left your daughter.” So she went home, found the child lying on the bed, and the demon gone.

Then he returned from the region of Tyre, and went by way of Sidon towards the Sea of Galilee, in the region of the Decapolis. They brought to him a deaf man who had an impediment in his speech; and they begged him to lay his hand on him. He took him aside in private, away from the crowd, and put his fingers into his ears, and he spat and touched his tongue. Then looking up to heaven, he sighed and said to him, “Ephphatha,” that is, “Be opened.” And immediately his ears were opened, his tongue was released, and he spoke plainly. Then Jesus ordered them to tell no one; but the more he ordered them, the more zealously they proclaimed it. They were astounded beyond measure, saying, “He has done everything well; he even makes the deaf to hear and the mute to speak.”

The second consolation is this, we need not be bound by our involuntary impulses.  There is no way of knowing what went on inside Jesus between his callous rejection of the mother’s first request that Jesus heal her daughter and her second pitch pleading for favor, but Jesus’ impulsive “no” became an accomplished “yes.” Jesus broke through the limiting ideas of who or how or what he was supposed to be and extended his mercy to a stranger.

I was a Transitional Deacon serving at St. Mark’s in Berkeley. The rector of seventeen years tenure had retired and an interim had not yet been found. It was the first day I was the only clergy person present for the Wednesday morning Eucharist, the first day I was responsible for this big, beautiful church campus and I felt the full weight of the keys in my cassock.

A new woman joined the Wednesday regulars for worship. Following the service I welcomed her then showed her the convoluted way through the sanctuary to the enclosed side courtyard leading to the underground parking garage. As we stood chatting I noticed a youngish black man, disheveled dreadlocks, white tee shirt, thick metal chain looped from his hip standing across the courtyard. I nodded to acknowledge him, continued my conversation with the new woman all the while wondering how this man got into the courtyard.

Being an urban setting with a handful of homeless folk living in the church garage, the entryways to the courtyard were locked, as were all of the church doors.  After unlocking the gate to allow the woman to descend to the parking garage, I turned to face the man in the courtyard. As we approached each other I was wretchedly aware that not another soul breathed on the campus. When face to face I smiled, introduced myself and asked the stranger, “What may I do for you?” He answered, “I want to pray.” I replied, “Shall we sit on this bench?” “No, I want to pray in the church.”

I would be lying if I did not admit that I was alarmed. “This is the first day I am responsible for the church. What if he destroys it?  won’t leave? attacks me?” At the same time I frantically implored, “God, this is your church and he must be one of your people.” So I led the stranger into the sanctuary, up the steps to the chancel. He sat and closed his eyes. I did likewise. Eight or ten minutes passed in silence, notwithstanding my racing mind,  “Debra, why are you anxious about this man yet did not have a second thought about the new woman - both are strangers? Why are you partial? What is wrong with you?” Eventually I asked again, “What may I do for you?” The man opened his eyes, looked at me and quietly said, “I just want to pray.”

I began to relax, be still and present. I have no idea how much time passed before I heard him stir, and opened my eyes. He stood up, looked me straight in the eyes and said “Thank you.” I stood up, looked back and asked, “What is your name?” “Jesus.” My tears erupted. He said no more as I walked with him to the door. I have no idea how he exited the locked courtyard.

Like Jesus with the Gentile mother, my involuntary impulse was to malign the stranger as  a scavenger or enemy harboring ill intentions.  Like Jesus I wanted to withhold God’s blessing. Much as the persistent mother refused to be turned away, the man on the St. Mark’s courtyard prevailed, turning my fear into humble supplication and transforming my heart from stone to tears.