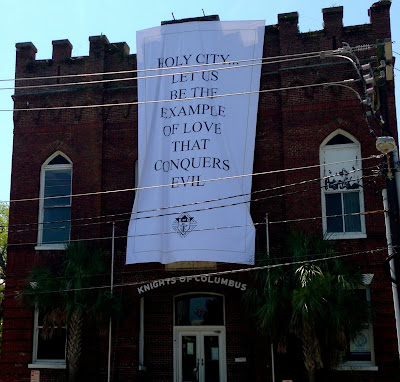 Mark 6:14-29        King Herod heard of the demons cast out and the many who were anointed and cured, for Jesus' name had become known. Some were saying, "John the baptizer has been raised from the dead; and for this reason these powers are at work in him." But others said, "It is Elijah." And others said, "It is a prophet, like one of the prophets of old." But when Herod heard of it, he said, "John, whom I beheaded, has been raised."
For Herod himself had sent men who arrested John, bound him, and put him in prison on account of Herodias, his brother Philip's wife, because Herod had married her. For John had been telling Herod, "It is not lawful for you to have your brother's wife." And Herodias had a grudge against him, and wanted to kill him. But she could not, for Herod feared John, knowing that he was a righteous and holy man, and he protected him. When he heard him, he was greatly perplexed; and yet he liked to listen to him. But an opportunity came when Herod on his birthday gave a banquet for his courtiers and officers and for the leaders of Galilee. When his daughter Herodias came in and danced, she pleased Herod and his guests; and the king said to the girl, "Ask me for whatever you wish, and I will give it." And he solemnly swore to her, "Whatever you ask me, I will give you, even half of my kingdom." She went out and said to her mother, "What should I ask for?" She replied, "The head of John the baptizer." Immediately she rushed back to the king and requested, "I want you to give me at once the head of John the Baptist on a platter." The king was deeply grieved; yet out of regard for his oaths and for the guests, he did not want to refuse her. Immediately the king sent a soldier of the guard with orders to bring John's head. He went and beheaded him in the prison, brought his head on a platter, and gave it to the girl. Then the girl gave it to her mother. When his disciples heard about it, they came and took his body, and laid it in a tomb.
Reflection             On June 21st we witnessed a show of love conquering evil in Charleston, South Carolina when the Emmanuel American Methodist Episcopal Church responded to the murder of their senior pastor and eight other church members who were gunned down during a Bible study. Rather than eat the bait of evil and set off riots and a race war, the leaders and people of the AME church, as well as the entire Charleston community, chose to respond with peace and unity which they had the courage to do because they put their faith in God and left no room for evil.
Presiding at the first Emmanuel AME Sunday service just four days after the tragic shooting, Rev. Goff pierced the hearts of the people in the church and across the nation when he preached, “Some wanted to divide the races - black and white and brown - but no weapon formed against us shall prosper.” That same morning outside the doors of the AME church hung a banner that read, “Holy City (Charleston’s nickname because it has churches on virtually every corner) Holy City… let us be the example of love that conquers evil.”
Which begs the question, what does love that conquers evil look like? I believe it looks like red, brown, black, yellow and white people praying together and refusing to sink to the lowest common denominator, fear, especially fear of the other. By contrast evil that conquers love looks like the fearful King Herod. Although he knew John the Baptizer to be a “righteous and holy man,” when push came to shove and his privilege, pride and power were on the line, Herod was afraid, put his faith in himself and opened the door for evil. Evil works through fearful people to destroy whatever they fear threatens their security, safety, esteem, power and control. Acting out of fear Herod allowed the working of evil to execute John even though he knew John to be holy and righteous.


Evil arises when we succumb to fear that our safety, security, esteem, power or control is threatened, and our faith is thereby undermined. You see, the opposite of faith is fear. Therefore, the way to overcome fear is faith in God that is Love with us, no matter what. When we are filled with Love there is no room for evil.
Posted by Debra Asis at 8:28 AM No comments: