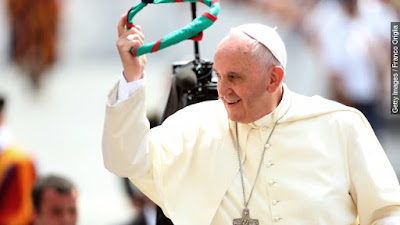 Acts 9:1-20
Saul, still breathing threats and murder against the disciples of the Lord, went to the high priest and asked him for letters to the synagogues at Damascus, so that if he found any who belonged to the Way, men or women, he might bring them bound to Jerusalem. Now as he was going along and approaching Damascus, suddenly a light from heaven flashed around him. He fell to the ground and heard a voice saying to him, "Saul, Saul, why do you persecute me?" He asked, "Who are you, Lord?" The reply came, "I am Jesus, whom you are persecuting. But get up and enter the city, and you will be told what you are to do." The men who were traveling with him stood speechless because they heard the voice but saw no one. Saul got up from the ground, and though his eyes were open, he could see nothing; so they led him by the hand and brought him into Damascus. For three days he was without sight, and neither ate nor drank.

Now there was a disciple in Damascus named Ananias. The Lord said to him in a vision, "Ananias." He answered, "Here I am, Lord." The Lord said to him, "Get up and go to the street called Straight, and at the house of Judas look for a man of Tarsus named Saul. At this moment he is praying, and he has seen in a vision a man named Ananias come in and lay his hands on him so that he might regain his sight." But Ananias answered, "Lord, I have heard from many about this man, how much evil he has done to your saints in Jerusalem; and here he has authority from the chief priests to bind all who invoke your name." But the Lord said to him, "Go, for he is an instrument whom I have chosen to bring my name before Gentiles and kings and before the people of Israel; I myself will show him how much he must suffer for the sake of my name." So Ananias went and entered the house. He laid his hands on Saul and said, "Brother Saul, the Lord Jesus, who appeared to you on your way here, has sent me so that you may regain your sight and be filled with the Holy Spirit." And immediately something like scales fell from his eyes, and his sight was restored. Then he got up and was baptized, and after taking some food, he regained his strength.

For several days he was with the disciples in Damascus, and immediately he began to proclaim Jesus in the synagogues, saying, "He is the Son of God.”

Reflection         I have no idea if Pope Francis ever had a road to Damascus experience. But I believe on Friday morning the Roman Catholic Church was knocked off its proverbial horse when the Vatican released Pope Francis’ apostolic exhortation — “Amoris Laetitia,” or “The Joy of Love” in which he “urges church leaders to serve as nurturing pastors, not as rigid enforcers of doctrine.” In a game changing proclamation the bishop of Rome called for the Roman Church “to be more welcoming and less judgmental, and he seemingly signaled a pastoral path for divorced and remarried Catholics to receive holy communion.” Francis does not stop there. He “calls for priests to welcome single parents, gay people and unmarried straight couples who are living together.” Even though he maintained the singularity of heterosexual marriage, the bishop of Rome writes, “A pastor cannot feel that it is enough to simply apply moral laws to those living in ‘irregular’ situations, as if they were stones to throw at people’s lives.” He continues, “I understand those who prefer a more rigorous pastoral care which leaves no room for confusion.” (Read - there are those who want the black and white certainly of unbending rules and regulations) “But, I sincerely believe that Jesus wants a Church attentive to the goodness which the Holy Spirit sows in the midst of human weakness… We have been called to form consciences, not to replace them..”*

Which brings us to an earlier world changing moment. “Saul, still breathing threats and murder against the disciples of the Lord, went to the high priest and asked him for letters to the synagogues at Damascus, so that if he found any who belonged to the Way, men or women, he might bring them bound to Jerusalem.” For the rigorist Saul there is no room for confusion. If you dare to break or even question the religious or political status quo, you are to be apprehended and exported.  That is, until something inexplicable happens. The lights go on and Saul hears the Lord ask him, “Why do you persecute me?” Could this have been the birth of Saul’s inner voice of conscience? Could it have been the seed of goodness “which the Holy Spirit sows in the midst of human weakness?”

All that we experience is in and of, with and through God. Every moment we breathe in relationship with God. Everything we think and feel, say and do is in relationship with God, the goodness “which the Holy Spirit sows in the midst of human weakness.” The thing is, as with Saul, we cannot wrap our minds around it. Our encounter with the Divine is too much to apprehend. We cannot see it until those who have gone before us help us open our eyes and remember how God is acting in our lives. Which is what I believe Pope Francis is doing in the world today. Like Ananias, Pope Francis is answering God’s call to lay his healing hands upon the peoples of this world, to open our eyes and remember our baptism as sisters and brothers of One, Holy Family of God.

If you found this post to be meaningful, please share by clicking on the icons below. Thank You.
Posted by Debra Asis at 2:59 PM No comments: