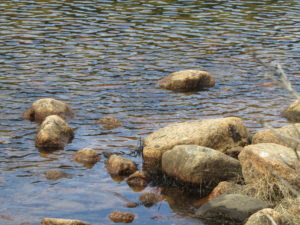 Now the Lord came and stood there, calling as before, “Samuel! Samuel!” And Samuel said, “Speak, for your servant is listening.” [Then the Lord said to Samuel, “See, I am about to do something in Israel that will make both ears of anyone who hears of it tingle. On that day I will fulfill against Eli all that I have spoken concerning his house, from beginning to end. For I have told him that I am about to punish his house forever, for the iniquity that he knew, because his sons were blaspheming God, and he did not restrain them. Therefore I swear to the house of Eli that the iniquity of Eli’s house shall not be expiated by sacrifice or offering forever.”

Samuel lay there until morning; then he opened the doors of the house of the Lord. Samuel was afraid to tell the vision to Eli. But Eli called Samuel and said, “Samuel, my son.” He said, “Here I am.” Eli said, “What was it that he told you? Do not hide it from me. May God do so to you and more also, if you hide anything from me of all that he told you.” So Samuel told him everything and hid nothing from him. Then he said, “It is the Lord; let him do what seems good to him.”

As Samuel grew up, the Lord was with him and let none of his words fall to the ground. And all Israel from Dan to Beer-sheba knew that Samuel was a trustworthy prophet of the Lord.

Do we want to take the chance that, like Samuel, what we hear might be very hard to live into or pass on? In any case, how do we know if we are listening to the Word God and not the internalized voice of our culture, upbringing or our imagination?

Assuming we do want to hear the Word God, let’ s consider the last question, “How do we know what we think we hear is the Word God?” A couple of clues are nestled in the wisdom tale of Samuel and Eli. First of all, the boy Samuel, the listener, is not the one who identifies the voice of the Lord. It is the wise old man Eli who “perceived that the Lord was calling the boy.”

If you found this post to be meaningful, please share by clicking on icon below. Thank you.
Posted by Debra Asis at 8:05 AM No comments: