As we read spiritually about spiritual things, we open our hearts to God's voice. Sometimes we must be willing to put down the book we are reading and just listen to what God is saying to us through its words.
Posted by Debra Asis at 9:38 AM No comments:

I have listened to some suggestions for how to make engaging the Scripture text easier and perhaps more meaning on the blog. So here goes. On Sunday nights I will post the Scripture for the following Sunday right here. Below the text are questions to help you engage the text. If you want to see an example of how I engaged last week's text, please scroll down to "My engagement..." following the John 20:19-31 text.
I hope this is helpful and that you feel encouraged to click on "comments" just below the text and post you responses. ............Grace and Peace to all. ....Debra

Jesus showed himself again to the disciples by the Sea of Tiberias; and he showed himself in this way. Gathered there together were Simon Peter, Thomas called the Twin, Nathanael of Cana in Galilee, the sons of Zebedee, and two others of his disciples. Simon Peter said to them, "I am going fishing." They said to him, "We will go with you." They went out and got into the boat, but that night they caught nothing.

Just after daybreak, Jesus stood on the beach; but the disciples did not know that it was Jesus. Jesus said to them, "Children, you have no fish, have you?" They answered him, "No." He said to them, "Cast the net to the right side of the boat, and you will find some." So they cast it, and now they were not able to haul it in because there were so many fish. That disciple whom Jesus loved said to Peter, "It is the Lord!" When Simon Peter heard that it was the Lord, he put on some clothes, for he was naked, and jumped into the sea. But the other disciples came in the boat, dragging the net full of fish, for they were not far from the land, only about a hundred yards off.

When they had gone ashore, they saw a charcoal fire there, with fish on it, and bread. Jesus said to them, "Bring some of the fish that you have just caught." So Simon Peter went aboard and hauled the net ashore, full of large fish, a hundred fifty-three of them; and though there were so many, the net was not torn. Jesus said to them, "Come and have breakfast." Now none of the disciples dared to ask him, "Who are you?" because they knew it was the Lord. Jesus came and took the bread and gave it to them, and did the same with the fish. This was now the third time that Jesus appeared to the disciples after he was raised from the dead.

Questions for engaging the text:

- What do I observe? What am I seeing? Does this passage raise questions for me?

- Is anything attracting me, drawing my attention, or repulsing me?

- What response is emerging within me? What is my response to what is attracting me?***

- In what ways might I specifically act on my insights in the world?

Posted by Debra Asis at 7:51 PM No comments: 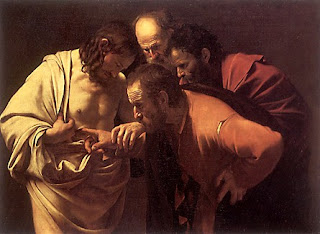 When it was evening on that day, the first day of the week, and the doors of the house where the disciples had met were locked for fear of the Jews, Jesus came and stood among them and said, "Peace be with you." After he said this, he showed them his hands and his side. Then the disciples rejoiced when they saw the Lord. Jesus said to them again, "Peace be with you. As the Father has sent me, so I send you." When he had said this, he breathed on them and said to them, "Receive the Holy Spirit. If you forgive the sins of any, they are forgiven them; if you retain the sins of any, they are retained."

But Thomas (who was called the Twin), one of the twelve, was not with them when Jesus came. So the other disciples told him, "We have seen the Lord." But he said to them, "Unless I see the mark of the nails in his hands, and put my finger in the mark of the nails and my hand in his side, I will not believe."

A week later his disciples were again in the house, and Thomas was with them. Although the doors were shut, Jesus came and stood among them and said, "Peace be with you." Then he said to Thomas, "Put your finger here and see my hands. Reach out your hand and put it in my side. Do not doubt but believe." Thomas answered him, "My Lord and my God!" Jesus said to him, "Have you believed because you have seen me? Blessed are those who have not seen and yet have come to believe."

Now Jesus did many other signs in the presence of his disciples, which are not written in this book. But these are written so that you may come to believe that Jesus is the Messiah, the Son of God, and that through believing you may have life in his name.

My engagement with the text:

I noticed that Jesus arrived among the disciples apparently unhindered by the locked door. He spoke to the disciples, “Peace be with you,” and they didn’t recognize his voice. Only after Jesus showed them his wounds did they believe it was him. The exact same sequence of events happened the following Sunday with Thomas. Again Jesus arrived, despite the shut doors, stood among the disciples and spoke. But Thomas did not believe it was Jesus until he touched Jesus’ wounds.

I was both attracted to and wanted to skip over the words, “If you forgive the sins of any, they are forgiven; if you retain the sins of any, they are retained.” It seems like a big deal to have the power to forgive or not forgive. And even when I want to be forgiving sometimes I’m not. I realize that when I am not forgiving I am bound by it, the sting of the sin or hurt remains in me. I am not free and I am not peaceful.

The response that rises up in me is, Lord, I want your peace. Please help me to be forgiving so that your peace will be with me. Amen

After pausing and being still for a few minutes I felt peaceful. A bit later it occurred to me that when I am at peace in my self and with my self I can be at peace with others and the world. Even my desire to be forgiving opens me to peace that I can bring into the world. Debra

Posted by Debra Asis at 1:08 PM No comments: