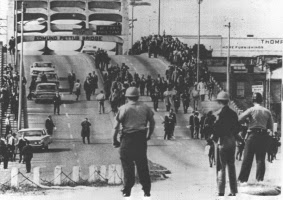 Mark 1:14-20        Now after John was arrested, Jesus came to Galilee, proclaiming the good news of God, and saying, "The time is fulfilled, and the kingdom of God has come near; repent, and believe in the good news."
As Jesus passed along the Sea of Galilee, he saw Simon and his brother Andrew casting a net into the sea-- for they were fishermen. And Jesus said to them, "Follow me and I will make you fish for people." And immediately they left their nets and followed him. As he went a little farther, he saw James son of Zebedee and his brother John, who were in their boat mending the nets. Immediately he called them; and they left their father Zebedee in the boat with the hired men, and followed him.

Reflection       We have to admit, this gospel story is not very convincing. No time is wasted with details to set the stage and satisfy our curiosity. Jesus is going to change the world for the better (which of course is the euanggelion - the good news)  and he needs help now.  So Jesus casts his net. Apparently without hesitation Simon and his brother Andrew put down their nets (their lives)  and follow Jesus. I wonder if either of them asked, “What do you mean, fish for people?” If not, the way the plot raced forward they did not have long to wait before they witnessed Jesus cast his net again and catch  another pair of brothers, James and John, who immediately stood up, left their father in the boat and followed Jesus. which makes me think the writer was using words to point to something more than an historical event.

There seems to be a pattern emerging. Jesus goes looking for helpers and casts his proverbial net. Was it charm, charisma, an unspeable presence that compelled some to stop whatever they were doing and follow Jesus? I wonder how many others Jesus called; Charles, Don, Marilyn, Howard, folks who kept mending their nets, shaping their clay pots, fashioning sandles or collecting taxes? I wonder how many people averted their eyes and waited for this strange man shouting something about the “Kingdom of God being here” to pass by before looking at one another, shrugging their shoulders and rolling their eyes? I wonder how many times Jesus cast his net before he caught Simon and Andrew, James and John?
Getting back to the pattern. Jesus looks for helpers, calls them and without hesitation they stop what they are doing and follow him. It reminds me of something John Lewis said. You may recall Lewis is a congressman from Georgia and legendary leader of the nonviolent march over the Edmund Petis bridge on the way from Selma to Montgomery, Alabama in 1965 hoping to make the world a better place, particularly for people of color. Lewis said and I quote, “When you pray, move your feet.” He continues to teach those who will listen that good is already here (even in our enemies).  The question is, how do we make the euanggelion, the good news for everyone, real. Lewis’ answer is, “When you pray, move your feet.”
How many times must Jesus cast his net before everyone one of us catches the euanggelion, the earth shattering, world changing good news of the grace of God, the peace of God, the efficacy of God, the kingdom of God available to all with  a will to change our minds and put feet on our prayers?


If you fround this post to be meaningful, please share it by clicking on the icons below.  Thanks you.
Posted by Debra Asis at 7:43 AM No comments: