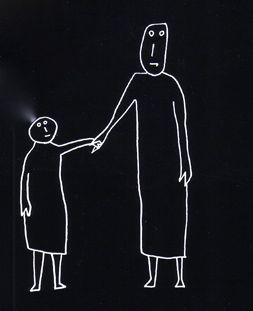 Luke 15:1-3, 11b-32        All the tax collectors and sinners were coming near to listen to Jesus. And the Pharisees and the scribes were grumbling and saying, "This fellow welcomes sinners and eats with them."  So Jesus told them this parable:
"There was a man who had two sons. The younger of them said to his father, 'Father, give me the share of the property that will belong to me.' So he divided his property between them. A few days later the younger son gathered all he had and traveled to a distant country, and there he squandered his property in dissolute living. When he had spent everything, a severe famine took place throughout that country, and he began to be in need. So he went and hired himself out to one of the citizens of that country, who sent him to his fields to feed the pigs. He would gladly have filled himself with the pods that the pigs were eating; and no one gave him anything. But when he came to himself he said, 'How many of my father's hired hands have bread enough and to spare, but here I am dying of hunger! I will get up and go to my father, and I will say to him, "Father, I have sinned against heaven and before you; I am no longer worthy to be called your son; treat me like one of your hired hands."' So he set off and went to his father. But while he was still far off, his father saw him and was filled with compassion; he ran and put his arms around him and kissed him. Then the son said to him, 'Father, I have sinned against heaven and before you; I am no longer worthy to be called your son.' But the father said to his slaves, 'Quickly, bring out a robe--the best one--and put it on him; put a ring on his finger and sandals on his feet. And get the fatted calf and kill it, and let us eat and celebrate; for this son of mine was dead and is alive again; he was lost and is found!' And they began to celebrate.
"Now his elder son was in the field; and when he came and approached the house, he heard music and dancing. He called one of the slaves and asked what was going on. He replied, 'Your brother has come, and your father has killed the fatted calf, because he has got him back safe and sound.' Then he became angry and refused to go in. His father came out and began to plead with him. But he answered his father, 'Listen! For all these years I have been working like a slave for you, and I have never disobeyed your command; yet you have never given me even a young goat so that I might celebrate with my friends. But when this son of yours came back, who has devoured your property with prostitutes, you killed the fatted calf for him!' Then the father said to him, 'Son, you are always with me, and all that is mine is yours. But we had to celebrate and rejoice, because this brother of yours was dead and has come to life; he was lost and has been found.'"

Reflection       Jesus tells the story of the prodigal father and his two sons to the tax collectors, sinners, Pharisees and scribes. That includes just about everyone. The sinners and the self righteous are equally implicated. Regardless in which group you may find yourself I believe Jesus intends this story for every one of us. As the author of the First Epistle of John proclaims, “If we say we have no sin, we deceive ourselves, and the truth is not in us....”(1 John 1:8) We are all sinners. We have all left home and turned away from God, and we are “dying of hunger.”
And here’s the thing. Although we have sinned, there is no need to beat ourselves up, to sling mud at ourselves and eat with the pigs. Shame and self-loathing do nothing but keep us away from God. When we change our minds and remember God’s prodigal love, we are at the starting place for reconciliation. As soon as we turn our minds (and hearts) toward God, God, like the prodigal father who is aggrieved by his son’s seperation, reaches out to us and plants the kiss of peace on our necks.
Although we may expect to be humiliated, to grovel and be punished and to make reparations, God’s prodigal love leaps ahead of us and restores our relationship with God and one another. This is reconciliation. It is not the way of the world that demands an account of our transgressions, executes judgment and requires reparation. The way of living and moving and finding our being in God is the way of being in love.
Still, something is expected of us. Our right response to God’s prodigal love is to take responsibility for our actions. And in so doing we must join St. Paul and admit, “ For the good that I would I do not; but the evil which I would not, that I do.” (R0 7.19)  Changing our minds and living in love we, much as the younger son, must not only acknowledge God’s prodigal love but also admit our utter dependence upon it.

Posted by Debra Asis at 8:59 AM No comments: