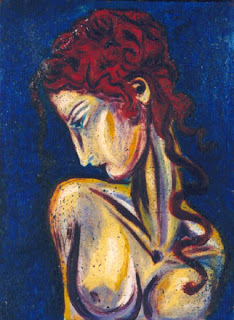 Luke 9:51-62        When the days drew near for Jesus to be taken up, he set his face to go to Jerusalem. And he sent messengers ahead of him. On their way they entered a village of the Samaritans to make ready for him; but they did not receive him, because his face was set toward Jerusalem. When his disciples James and John saw it, they said, "Lord, do you want us to command fire to come down from heaven and consume them?" But he turned and rebuked them. Then they went on to another village.
As they were going along the road, someone said to him, "I will follow you wherever you go." And Jesus said to him, "Foxes have holes, and birds of the air have nests; but the Son of Man has nowhere to lay his head." To another he said, "Follow me." But he said, "Lord, first let me go and bury my father." But Jesus said to him, "Let the dead bury their own dead; but as for you, go and proclaim the kingdom of God." Another said, "I will follow you, Lord; but let me first say farewell to those at my home." Jesus said to him, "No one who puts a hand to the plow and looks back is fit for the kingdom of God."
Reflection        Jesus seems so completely human in this text. I can almost hear him draw in a deep breath and sigh a faltering exhale as he sures himself up to do the next hard thing - return to Jerusalem. No doubt he feels that sick sense in his gut and gropping fingers on his throat. Soon we will hear him lament, “Yet today, tomorrow, and the next day I must be on my way, because it is impossible for a prophet to be killed away from Jerusalem.” Jerusalem, Jerusalem, the city that kills the prophets and stones those who are sent to it! (Luke 13,33-34)
Jesus knows where he is headed. No wonder he seems a bit irritable, not cutting his disciples much slack when he rebukes them, maybe even feeling a bit lonely and isolated when he compares himself negatively with foxes and birds. Jesus knows there is only one thing to do and it is not easy. “Proclaim the kingdom of God.” Let nothing be a distraction. Set your direction and don’t look back.
This text encourages me because it gives me a clue that I am not the only one who struggles to “set my face to go to Jerusalem,” which is to say, to proclaim the kingdom of God in all that I say and all that I do. Even Jesus, who as far as I know never stopped praising the name of God, never turned away from his relationship in God, struggled. Even Jesus had to reach through the trenches of his own humanity, had to suffer the indignity (and discomfort) of having no place to rest his head or call his earthly home. Even Jesus had to stubbornly set his face to persevere, fix his gaze on the horizon and not look back. “Proclaiming the kingdom of God” in all that he said and all that he did cost Jesus everything. I believe he experienced it with every sense and every cell of his humanity. That is what encourages me.
When I hear Jesus say, “Follow me,” I get a sinking feeling in my gut and watery tightness in my throat and know that when I say, “Here I am Lord,” Jesus is with me in my aching humanity because he has been here.
Posted by Debra Asis at 9:21 AM No comments: