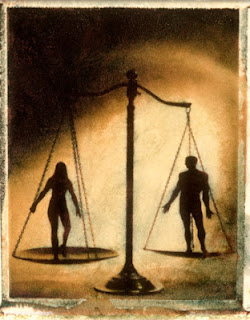 Luke 7:11-17        Soon after healing the centurion's slave, Jesus went to a town called Nain, and his disciples and a large crowd went with him. As he approached the gate of the town, a man who had died was being carried out. He was his mother's only son, and she was a widow; and with her was a large crowd from the town. When the Lord saw her, he had compassion for her and said to her, "Do not weep." Then he came forward and touched the bier, and the bearers stood still. And he said, "Young man, I say to you, rise!" The dead man sat up and began to speak, and Jesus gave him to his mother. Fear seized all of them; and they glorified God, saying, "A great prophet has risen among us!" and "God has looked favorably on his people!" This word about him spread throughout Judea and all the surrounding country.

Reflection      If ever I wondered what Jesus’ position was regarding women this story about the widow and her dead son clinches it for me. When Jesus looked at the woman walking next to her son’s body in a funeral procession what he saw was a person with no status, no home, and no way to survive. In an instant Jesus  assessed the situation, decided the widow’s presumptive fate was not good enough and he was roused to action. Nothing would prevent him, not even death, from subverting the assumptions that would seal the woman’s fate. If it meant doing a miracle, raising her son from the dead, so be it. Nothing could seperate the widow ( every woman, every person) from the love of God through Jesus. Not even first century cultural assumptions that an unmarried woman with no son was essentially worthless and had no place in society could steal life from her.
Which brings us to the subject of miracles.  Miracle stories are problemmatic no matter how I sit with them. But the more I hung out with Jesus and the widow the more I realized the real problem is - we don’t expect miracles. We are willing to capitulate to circumstances. We accept social conventions as if they were inevitable (ie. a woman has no place in the world without a man). We allow our lives to be guided by probabilities and jaundiced assumptions. We are willing to succumb to a reasoned or likely outcome. We don’t expect miracles!
But reasonable or likely outcomes were not good enough for Jesus and should not be good enough for us. Jesus intervened to right a fundamental socio-cultural flaw of his time. Jesus acted without restraint to excavate the assumption that women have no worth or rights without men.  Jesus intervened to reverse the widow’s status.
Now just in case you imagine Jesus’ miraculous intervention with the widow of Nain set the world of believers straight regarding the worth of single women, not so fast. On two occasions in the 21st century I personally have been told by a person set in authority over me that I was less credible (and presumably of less value) because I am a single woman. I refuse to accept the assumption. And therein lies the miracle. As soon as we ally ourselves with Jesus, unveil oppressive social conventions and refuse to accept ‘inevitable’ outcomes, the game is changed. The world is turned upside down and life is restored to the dead. It is a miracle!
Posted by Debra Asis at 10:59 AM No comments: