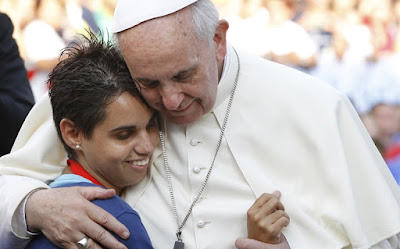 Reflection    Jesus’ story is not about in group privilege and access to exclusive power. The story is about a man, like Jesus, who even though he was not in the in group, was reaching out and healing people. Which is to say, the unknown man who was casting out demons in Jesus’ name was promoting the kingdom of God, not only by healing people but also by tearing down walls, stumbling blocks, that separate people into in groups and out groups that protect proprietary interests and territory. The man dared to step over a stumbling block that avers, some groups have an exclusive claim to God.

Most of us hear this story and react with revulsion  to the notion of chopping off body parts because much like the disciples we miss the mark. We don’t want to give up our agency (hands), autonomy (feet), preferred way of seeing things (eyes) or our exclusive relationship with God.  But Jesus calls this scandalizó, Greek for stumbling. Some translations  call this sin. Whatever words we use, the meaning derives from the ancient Jewish tradition that counsels people of God not to turn away from God, but rather to repent, teshuvah, the Hebrew word for returning to God or God oriented consciousness.

This week the people of the United States and the world have witnessed a series of messages from the Bishop of Rome, Pope Francis. I believe the heart of his message is simple, “Do unto others as you would have them do to you.” Though Francis did not overtly add, “and cut off or turn away from anything that prevents you from doing so,” I am willing to wager he would agree because that is what returns us to all that is true, all that is good, God. Christians call this repentance. Jews, teshuvah. Muslims, tawbe. We all agree, what is true and good occurs when we are turned toward God.

Our individual and collective lives are saturated with distractions and attractions that lure our bodies, minds and souls to make idols of things that are not holy (food, drugs, sex, alcohol, adulation, exercise even compulsive seeking of the holy). We worship at the altars of security, esteem, power and control. We justify tiny lies, bits of gossip, self-aggrandizement. We fail to hold ourselves and each other to account. And so, bit by bit we turn further away from God.

Speaking to world leaders at the United Nations in New York, Pope Francis called for all 193 member nations to cut off the “boundless thirst for power and material prosperity.” That pretty much cuts to the marrow of the issues besetting the entire globe. It is time for us to chop off those parts, individually and collectively, that lead to the untold suffering of people and irreparable damage to our planet.

If you found this message meaningful, please share by clicking on the icons below. Thank you.
Posted by Debra Asis at 12:20 PM No comments: