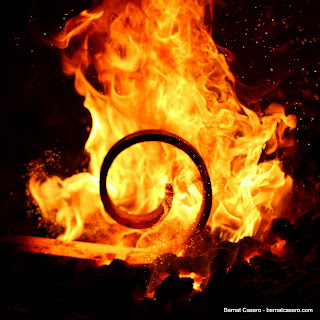 Luke 12:49-56     Jesus said, "I came to bring fire to the earth, and how I wish it were already kindled! I have a baptism with which to be baptized, and what stress I am under until it is completed! Do you think that I have come to bring peace to the earth? No, I tell you, but rather division! From now on five in one household will be divided, three against two and two against three; they will be divided:
father against son
and son against father,
mother against daughter
and daughter against mother,
mother-in-law against her daughter-in-law
and daughter-in-law against mother-in-law."
He also said to the crowds, "When you see a cloud rising in the west, you immediately say, `It is going to rain'; and so it happens. And when you see the south wind blowing, you say, `There will be scorching heat'; and it happens. You hypocrites! You know how to interpret the appearance of earth and sky, but why do you not know how to interpret the present time?"
Reflection      “The very existence of flame-throwers proves that some time, somewhere, someone said to themselves, ‘You know, I want to set those people over there on fire, but I’m just not close enought to get the job done.” (George Carlin)

Apparently Jesus knew that he was close enough to get the job done, to set the people on fire!. Jesus knew his mission was to “bring fire to the earth,” which is to say, he came to ignite passion for the living God within the heart of humanity. And, Jesus was not naiive. He understood the divisive effect of passion inflamed for the living God in the context of pagan or secular culture.

So Jesus warned the disciples (and us); throughout the earth, passion of and in and for living God will divide alliances, separate families, cull supporters of the common good from promoters of self interest, distinguish keepers of peace and reconciliation from protectors of the status quo and cull comunities of compassion from states of enmity.

Jesus’ fire turns things upside down, and I don’t just mean moneychanger’s tables. Jesus’ fire makes me look in the mirror and ask, where am I straddling the gap? Where am I holding onto “the way things have always been” in order to avoid the divisiveness of standing with Jesus on the side of the hungry, the stranger, the rule breaker?  Where am I avoiding divisiveness in order to be liked, approved of, or to keep the peace? Where am I throwing water on my passion for living God in order to be socially acceptable? Ooops! If we are honest with ourselves we must admit, we make compromises all the time. Still, Jesus’ sorting process burns on, it has for two thousand years.

Jesus is on a mission and there is no evidence that he will stop until it is accomplished. “His winnowing fork is in his hand, to clear his threshing floor, and to gather the wheat into his granary, but the chaff he will burn with unquenchable fire." (Luke3.17) That stirs up images of hammering chunks of rock from the earth, crushing then heating them to extreme temperatures, all the while hoping to extract a smidge of gold. The Spirit of Jesus within humanity is the refiner’s fire. It is passion burning from the inside out driving believers to distinguish ourselves from the secular realm. Yes, the process of being refined is not particularly pleasant, but it is not optional.

It is a matter of passion. What is it that drives us? What is it that moves us to get up in the morning, step out into the world and do whatever we do? I beleive Pierre Teilhard de Chardin answered this question when he wrote,“Someday, after mastering the winds, the waves, the tides and gravity, we shall harness for God the energies of love, and then, for a second time in the history of the world, man will discover fire.”

“Do you think I have come to bring peace to the earth? No, I tell you, but rather division.” The Spirit, the fire, the passion of Jesus within will not rest in peace until humanity’s heart of compassion is restored in each and every one of us and our passion is allied with God's own passion.. “Do you not know how to interpret the present time?"
Posted by Debra Asis at 12:20 PM No comments: