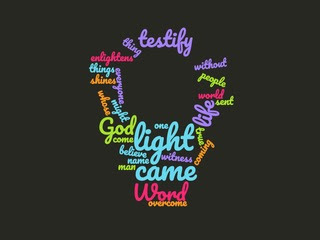 John 1:1-18        In the beginning was the Word, and the Word was with God, and the Word was God. He was in the beginning with God. All things came into being through him, and without him not one thing came into being. What has come into being in him was life, and the life was the light of all people. The light shines in the darkness, and the darkness did not overcome it.
There was a man sent from God, whose name was John. He came as a witness to testify to the light, so that all might believe through him. He himself was not the light, but he came to testify to the light. The true light, which enlightens everyone, was coming into the world.

He was in the world, and the world came into being through him; yet the world did not know him. He came to what was his own, and his own people did not accept him. But to all who received him, who believed in his name, he gave power to become children of God, who were born, not of blood or of the will of the flesh or of the will of man, but of God.
And the Word became flesh and lived among us, and we have seen his glory, the glory as of a father's only son, full of grace and truth. (John testified to him and cried out, "This was he of whom I said, 'He who comes after me ranks ahead of me because he was before me.'") From his fullness we have all received, grace upon grace. The law indeed was given through Moses; grace and truth came through Jesus Christ. No one has ever seen God. It is God the only Son, who is close to the Father's heart, who has made him known.

Reflection        Having just enjoyed Christmas with my family, including loquacious 11 year old Alec and 18 month old Wesley, I cannot count the number of times I heard Wesley invited to, “Use your Words.” Each time he complied, expressions of glee and encouragement resounded. The evocative power of words is compelling.

Perhaps that is why the writer of the Gospel according to John begins, “In the beginning was the Word” and “all things come into being” with the Word. The Greek for “Word” is “logos.” It refers to the wisdom, reason and order of God incarnate through Jesus, the human revelation of creative Divine Presence. Jesus reveals the expressive capacity for taking all things into account, considering them and using his words to instruct the physical and ethical grounds for right relationships, human with human and human with Divinity.

The “Word” may be said to represent the convergence of Divine and human genius. It conveys the gift of intellect present through the receptivity of humanity to Divinity. And here is the astonishing news. The “Word” is not the exclusive purview of Jesus. The ‘Word” represents “the true light, which enlightens everyone…” With the exception of those born silent, the spoken “Word” reveals the capacity of each of us to receive and express the wisdom, reason and order of God right here, right now, on earth.

It used to be that we heard the “Word” of God breaking through to us from some distant and surreal region beyond the beyond. It was the Word of remote God spoken through angels or a motley crew of snarky and sometimes cranky prophets. But today we have the feet on the ground revelation that ever since the very “beginning was the Word, and the Word was with God, and the Word was God.” And this Word that has come into being... is life itself ..life that is the light of all people.” This changes everything.

Here is the invitation for 2020. Use all your words to express the compelling power of God’s wisdom, reason and order on earth and every thing will be changed for the good.

If you found this post to be meaningful please share by clicking on icons below. Thank you.
Posted by Debra Asis at 10:16 AM

Email ThisBlogThis!Share to TwitterShare to FacebookShare to Pinterest
Labels: "Word", enlighten, In the beginning, John 1:1-18, light, use your words, Word